The world's richest duck sets off on a globe-trotting adventure to uncover several lost treasures with the help of his family and friends. Explore five exotic locations across the world and pogo-jump to victory as Scrooge McDuck in this NES classic.

DuckTales is a side-scrolling platformer developed and published by Capcom for the Nintendo Entertainment System. It was originally released in North America in 1989, making its way to Europe and Japan a year later. The game is based on the animated television series of the same name and follows the exploits of multi-billionaire "Uncle" Scrooge McDuck as he embarks on yet another globe-hopping adventure.

DuckTales was also released on Game Boy in 1990. While the gameplay of the original NES release was largely unchanged, the portable version features remixed stage layouts to compensate for a reduced screen resolution.

Thanks to the success of DuckTales, Capcom developed and published DuckTales 2 in 1993 as a direct sequel. The original game also received a full remake with the release of DuckTales: Remastered in 2013.

Scrooge McDuck is the world's wealthiest individual. On most days he enjoys nothing more than swimming through the great piles of treasure and currency he hoards inside his gigantic "Money Bin" located in Duckburg. Although most multi-billionaires would be content to simply live out the rest of their lives in comfort and luxury, Scrooge is a duck whose insatiable desire for wealth often drives him to the ends of the earth in search of even greater fortune.

For his latest treasure hunt, Uncle Scrooge enlists the aid of his three grand-nephews Huey, Dewey and Louie, as well as several of Scrooge's other acquaintances and employees. With the help of his friends, Scrooge travels between various exotic locations around the globe (and even the Moon) in order to uncover five "legendary treasures" and become even wealthier. However, Scrooge's enemies have already staked out each treasure's location in an effort to prevent Scrooge from obtaining these valuable artifacts.

Players control Uncle Scrooge as he travels the world on his quest for treasure. Unlike many platformers, Scrooge takes damage upon any contact with an enemy regardless of his angle of approach. Players must instead rely on Scrooge's trusty cane which can be used to "pogo-jump" onto enemies' heads; this also increases the height of Scrooge's jump, allowing players to reach higher areas. The cane can be used to collect items and treasure locked up inside of treasure chests scattered around the world; it can also be swung like a golf club to destroy obstacles or knock objects into enemies at range. Scrooge can even use his impressive pogo-jumping ablities to traverse deadly spikes and other hazards, preserving his tender webbed feet as his cane does all the work.

Scrooge can normally take up to three hits before losing a life. However, players can discover two hidden health upgrades in the Himalayas and Transylvania, potentially increasing Scrooge's HP to a total of five. DuckTales does not feature continues or a save system; players must complete the entire game in a single session without depleting their stock of extra lives in order to reach the end.

DuckTales features five stages which can be played in any order, each with their own distinct music, enemies and graphical tileset.

DuckTales contains a special ending shown if players finish the game with at least ten million dollars and have acquired both hidden treasures. This alternate ending shows the same newspaper from the normal ending, except the inset photograph shows Scrooge with a crown on his head. The article also states that Scrooge "stunned the world with his discovery of 2 lost treasures".

A third ending involves completing the game with zero cash in Scrooge's bank account. This ending's newspaper shows a picture of a dejected-looking Scrooge and remarks that he "lost his fortune in his search for the legendary five treasures. He will use them to rebuild his empire". 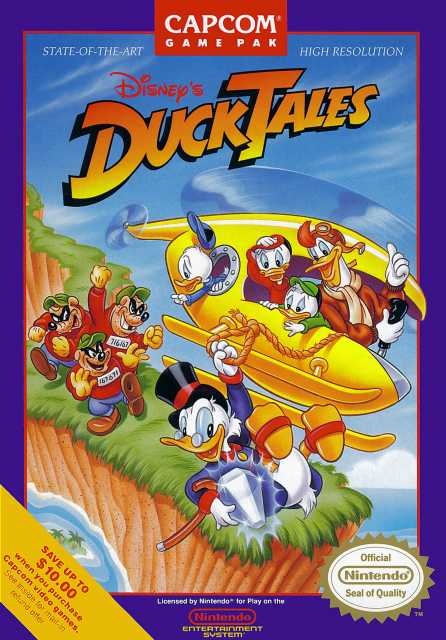