The story of a young, curious, and green-loving photojournalist named Jade, out to unravel an alien conspiracy on her home planet of Hillys.
PlayStation 2 Xbox 360

Beyond Good & Evil is the brain child of French game designer Michel Ancel. The game follows good samaritan and photojournalist Jade and companions: her pig uncle Pey'j and a warrior with a bad case of amnesia named Double H. The characters go on a journey to unravel a conspiracy reaching to the highest levels of government of the planet Hillys, avoiding the constant attacks of an invading alien armada, The DomZ. The game featured the same lush colors and esoteric designs that made Ancel's previous game, Rayman 2: The Great Escape, such a success. Combining elements of the Stealth-Action, Beat-Em-Up, Shooter, and Racing genres, Beyond Good and Evil was hailed by critics as one of the best games of 2003. The critical acclaim, however, didn't translate into impressive public response. As a result BG&E suffered disappointing sales across the PS2, Xbox, GameCube, and PC. Despite this however, a sequel for the game has been in development for some time, partly as a result of a barganing arangement within Ubisoft steming from Michael Ancel's dissapointment with Rayman Raving Rabbids. The sequel however has been in a state of development hell however almost since conception.

Michel Ancel wanted to call the game “Between Good & Evil”, but the Ubisoft marketing department didn’t like it.

War has come to the gates of the "peaceful mining world" Hillys. An invading alien force known as the DomZ has made several raids across the surface of the planet, also abducting members of the populace. The only force that can stand against the might of the invaders is the Alpha Sections. Led by General Kehck, the Alpha Sections are the only force that have been successful in fending off the DomZ.... or so they say. Reports, mostly surfacing from an underground newspaper published by an organization known as the IRIS Network, suggest that the Alpha Sections aren't as effective as they would have the populace believe. The reports claim that the Alpha Sections arrive at the scenes of DomZ attacks too late to do any damage to the alien forces and question how dedicated General Kehck is to eradicating the Alien attackers.

Enter Jade, a young woman living on a small lighthouse Island near the city of Hillys. With her Uncle Pey'j, Jade has taken it upon herself to protect all the children made orphans since the DomZ invasion. While enjoying afternoon meditation, she witnesses a large DomZ strike force descend from the sky. Activating a defensive shield (to protect the island from the artillery barrage) Jade is informed that her bank account is empty, and the power company won't supply her necessary energy for the shield leaving the island exposed to attack. The alien forces land on the island, and Jade, along with Pey'j, manage to defeat the DomZ soldiers before they abduct the orphans. Upon defeating the DomZ (and defeating a boss that crash landed deep into the surface of the island), the Alpha Sections arrive at the island and begin to take credit for Jade and Pey’j's actions.

In the fallout of the attack, Jade receives two messages. The first is from a biologist asking her to take photographs of every unique species of life on the planet for financial reward (Jade uses this money to restore the functionality of the shield). The second message comes from a mysterious gentleman who tasks Jade with photographing a pair of alien monsters in the Black Isle Mines to prove that DomZ have already settled on the planet Hillys. The adventure, as Jade comes to find out, was a test by the IRIS Network, a group of agents who suspect that the Alpha Sections are behind many of the DomZ kidnappings. Asking her to sneak into government facilities to photograph any evidence of malfeasance, Jade is soon roped into a conspiracy that will send her all over Hillys, and even to the dark side of the moon.

Beyond Good & Evil combines aspects of a number of game genres for various styles of play. These include sneaking, fighting, racing, photo-snapping, and shooting.

Jade spends the majority of the game sneaking around the various Alpha Section facilities, avoiding the heavily armed Alpha Sections guards. She can press herself up against walls, crawl through gaps, and roll to quickly avoid being detected. If needed, Jade can "quietly" take out the armed Alpha Sections soldiers by sneaking behind them and kicking their large air tanks. One hit to the tanks will cause green smoke to rupture from their helmets. As the soldier begins to run around and restore the proper air pressure, a second hit will cause the soldier's gas tank to burst, rocketing them to the sky before they explode.

In the game's boss fights (as well as any other battles) Jade will pull out her "Dai-Jo" staff to battle with the enemies. Jade doesn't lock onto enemies, but can very easily switch the target of her attacks by pointing the analog stick towards a different opponent. Actual battle has Jade dodging around attacks and attacking enemies when an opening appears. There are also other items that Jade can use in and out of combat that are collected throughout the game such as the disc shooter.

The key goal of Jade's missions is taking pictures of any suspicious activity inside the Alpha Sections bases and exposing the conspiracy.

Since Jade is a photographer, some of the game takes place behind a camera lens. Like the N64 game Pokémon Snap and the PS3 game Afrika, Jade can take pictures of various animals. Taking a picture of one of these animals results in financial reward which is used for purchase of new items.

Pearls are another form of currency found throughout the world. They can be obtained by defeating bosses, winning races and finding secret caves and sections of the city. Pearls are mainly used to upgrade Jade's hovercraft, giving it new capabilities that open up new sections of the world.

The actual game world of Hillys is a large ocean (divided into several “maps" by loading screens), filled with tiny islands and alcoves for Jade to explore via hovercraft for new upgrades and finding new species of animal to photograph. There is also a nameless city which is often returned to for mission updates and item purchase.

Towards the end of the game, the hovercraft merges with a large spacecraft - the Beluga. This allows Jade to fly into space for the final mission of the game.

Ubisoft officially released this soundtrack by Christophe Héral, allowing it to be legally download for free. 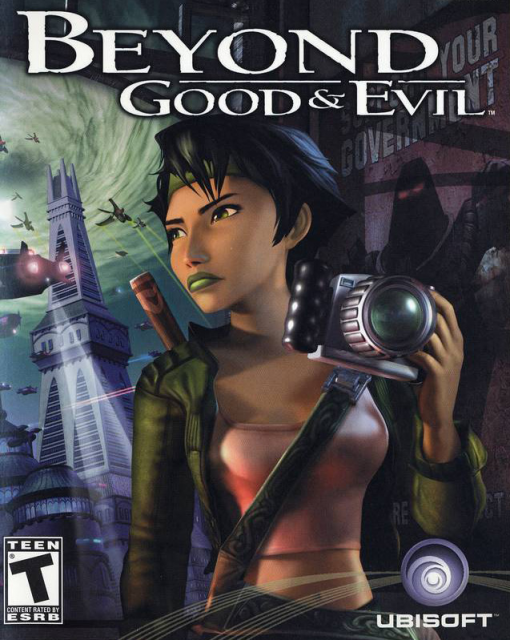