The second game in the Chameleon Twist franchise has gameplay reminiscent to that of its predecessor, however is accompanied by new environments, enemies, and abilities in this 3D platformer.

Chameleon Twist 2 was developed by Japan System Supply and published by Sunsoft and focuses on many of the same gameplay aspects as its predecessor. Yet again, a chameleon named Davey and his friends find themselves trapped in a strange realm that transforms then into a humanoid-chameleon creature. At the beginning of the game, the same mysterious white rabbit that appeared in the first is the cause of all of this, however this time it does not involve traveling into a magical hole. Instead, the rabbit merely knocks one of the chameleons (whichever the player chooses to play as) into the sky, and they suddenly enter the other realm.

The player must once again navigate through platform levels in order to achieve his ultimate goal of leaving this realm in the sky, and at the end of each stage is a boss that the player must defeat before moving on. Use of the chameleon's tongue is still necessary for fighting enemies and navigating the levels, and Chameleon Twist 2 also adds a parachute ability, that allows the player to fall at a slower pace, and vertical swinging polls, rather than solely the horizontal poles found in the first game. There is no multiplayer in this game, however. 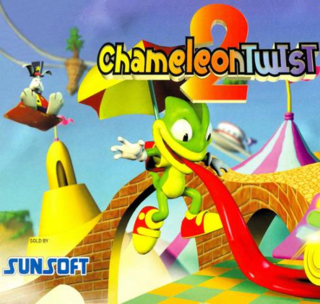