An aquatic themed side-scrolling shooter from 1991. It is the first SNES title in the Darius franchise.

Darius Twin is the first Super Nintendo entry in Taito's Darius series of shoot 'em up. It is the third game in the series chronologically. Like the rest of the series, the game has multiple branching paths and aquatic-themed bosses, often resembling sea creatures like angler fish and hermit crabs.

Darius Twin was followed by another Super Famicom/SNES exclusive game in the Darius series, 1993's Darius Force. Darius Force is known as Super Nova in the US.

Darius Twin takes place sometime after the events of Darius II (known as Sagaia outside of Japan). Darius, the home planet of the Darius series, has been taken over by an alien race, the Belser and their alliance, who have ruthlessly conquered parts of the galaxy in aquatic-themed spaceships. The player's job is to pilot a 'silver hawk' fighter craft, making their way back to Darius, and free it from the Belser. Depending on the path taken, and whether or not the player is successful at the task, there are five different endings that can be attained. While they differ in how thoroughly the player has managed in driving off the Belser, in all of them it's apparent that the player will be called back into action against some foe sooner rather than later.

This game does not depend much on the storyline. The only reference to the story seen is in the intro before the title screen and in the outro screens at the various endings.

In Darius Twin each game level (called "rounds" in-game) represents a planet that is being cleared of the Belser forces on the way to liberating the home planet of Darius. Every time a round is cleared, a screen displaying 12 planets arranged broadly in the shape of a fish is shown. The player has the option of 12 different paths through these, meaning that one playthrough requires only seven rounds.

The choice of path can affect what enemies will be faced, what upgrades will be received, and also which ending will be seen. The following table gives an overview of what upgrades are to be found on which levels, and where mini-boss fights are faced.

"Weapon Switch" upgrades is where the type of weapon the ship has is changed. Getting two of these would revert the ship's weapons back to the original type, and is not recommended. "Screen Kill" is an upgrade that. When activated, it destroys all the regular enemies on screen and deals a large amount of damage to mini-bosses.

The final level, Darius, has no upgrades, only a series of repeated encounters with the mini-bosses from the other levels.

Multiple upgrades are available in all planets/levels. To upgrade, the player must break a special cube container, which appears in packs of six. The sixth container will reveal a crystal that will yield an upgrade. The color and shape of the crystal will determine the kind of upgrade will be received. In typical arcade-game style, the upgrades appear mixed into the action, and it is entirely possible to miss them while fighting off the waves of enemies that appear along with them. This is an integral part of the gameplay of Darius Twin, with a lot of the challenge consisting in making use of the upgrades when available and, in co-operative mode, distributing them in the best way between the two ships.

The red upgrades that are collected change the weapons available to the player. When the game begins, the player has small orange lasers and, depending on what upgrades are chosen, the player may end up with the big white fireballs or the more powerful wave weapon that also cuts through all enemies and obstacles. Each new upgrade increases the damage dealt and changes the look of the weapon's shots.

The green upgrades signify new types of bombs that are added to the arsenal and serve as a secondary weapon. The player starts with a single bomb that drops down in front of the ship. When they are at the maximum level, it finishes with four red fireballs shooting out diagonally that can hit multiple enemies.

Orange cubes contain extra lives - there are only two of these in the entire game. Yellow cubes are like bombs which kill every enemy on the screen, except for mini-bosses, who are damaged badly by them.

As the name implies, this game allows two-player simultaneous mode. Player 1 will get the red silver hawk and player 2 will get the blue one. There are no differences in upgrades, enemies or difficulties between one and two-player mode. Maxing out the primary weapons or the bombs of both ships will not be possible before reaching the last boss. The shields on the other hand can reach their highest levels for both ships if the correct order is chosen, and if no upgrades are missed.

There are five different endings. Which ending is attained depends on which path is chosen, how many times the player died, and how many mini-bosses and bosses were not destroyed in time. Be aware that there might be more ways to receive these endings than those listed below.

If the player meets the qualifications for more than one ending, the one lowest down the chart takes precedence. 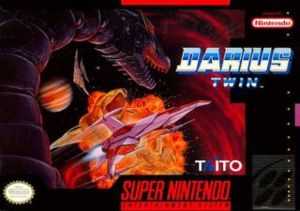