Blasto is a third-person shooter/platformer developed by Sony Interactive in 1998. This game is known to be comedian Phil Hartman's last project before his death.

After coming back from the 5th dimension, an evil tyrant alien named Bosc is trying to take over the planet Uranus and Earth while he's at it.  Bosc wishes to be well known all over the solar system for his evil army.  Captain Blasto is the only hero who can stop him and save Uranus and a few babes along the way.

Prior to its release, Blasto had generated a fair amount of buzz, due in part to Sony's role as developer as well as publisher and the increased marketing of the game which that entailed.  The voice of Phil Hartman as Blasto was an additional reason gamers and the gaming press anticipated this title.

Originally slated for an October 1997 release, Blasto was delayed until April of 1998.  This delay was apparently caused by the development team being overly ambitious with the project for the time allowed them.  Dylan Cuthbert (now president of Q Games, known for the PixelJunk series) had this to say when reflecting on Blasto in a 2008 interview:

"... the team and I really tried to put a lot of new and interesting ideas into that game but in the end the schedule was just too harsh for us all and we burnt ourselves out, resulting in something that definitely had potential but ultimately failed to hit the mark. "

Even with the added development time, Blasto was released to predominantly negative reviews, with the game's above average difficulty being singled out as a major issue. Despite the lukewarm reception, a sequel to Blasto was rumored but was possibly shelved on account of Phil Hartman's death 6 weeks after the game's debut.

However, on October 23 2007, Sony Computer Entertainment of America filed to protect the Blasto trademark which had been unregistered since 2005.  "Captain Blasto" was also trademarked by Sony and abandoned in 1999, only to be re-registered to a filmmaker named Christopher Preksta who used the name for a low-budget film with no connection to the original character or game.

The game plays essentially as a 3D platformer/3rd person shooter. Captain Blasto utilizes his trusty blaster to vaporize various aliens and robots. Levels are completed by rescuing Babes that have been held captive. Babes are rescued by solving relatively easy puzzles that usually involve fighting a few enemies and flipping a switch.
The game breaks off into 13 episodes as followed ( see list below) and as the game progresses the puzzles, and monsters get harder, so its not a walk in the park. The end boss is probably the hardest boss in the game, and should take you quite a few times to do it.

The following weapons can be obtained throughout the levels: 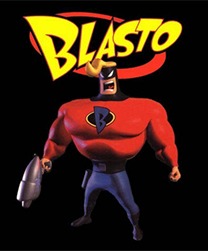