Stinger is a shoot-em-up developed by Konami. It is the North American version of the sequel to Twinbee.
Game Boy Advance

Known as “Moero! TwinBee: Cinnamon Hakasei wo Sukue” in Japan, Stinger is the second game in the highly popular TwinBee series. Departing from its roots in Japanese arcades, Stinger was a console-only release for the Famicom Disk System in 1986. Roughly a year later, it was brought to North America for the first time in series history and released on the Nintendo Entertainment System.

While the story elements were removed in the North American version, the premise of the game revolves around Twinbee, Winbee, and Gwinbee, sentient ships known as Stingers. Their creator, Professor Cinnamon has been kidnapped by the Attackons, who seek to turn the world into a ball of cotton candy. Skatch, Hoip and Merou must pilot the Stingers and save Cinnamon.

Stinger’s gameplay is simplistic in nature, supporting 2 players in the NES version, down from 3 on the Famicom. The A button fires the ship’s cannons and the B button shoots hearts into the air or drops bombs, depending on the level.

While the series is known for a top-down perspective, Stinger alternates between horizontal and vertical levels. However the objective throughout remains constant, which is to shoot through hordes of enemies on the way to confronting a boss at the end of the level.

Upon every other death, the “angel” of the ship will ascend upwards off the screen. If the player manages to grab it before it disappears, they will get back all of their lost power-ups.

The game’s pick-ups are scattered through the environment.

Shooting clouds will reveal bells, which can be juggled to change their color and obtain power-ups based on color:

There are 7 levels in the game, each ending with a boss fight. 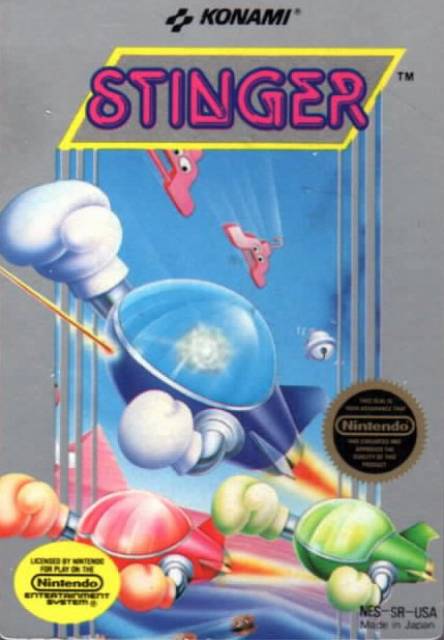