As the Black Tiger the player must slay three dragons that have plunged the kingdom into darkness in this classic Capcom Arcade platformer action game.

"Long Long ago, three dragons descended from skies above with a rolling thunder and destroyed a kingdom into darkness. From lengthy suffering and darkness of the kingdom came one brave fighter."

Black Tiger is a single player action-adventure platformer, death and damage to the player’s limited health comes frequently from traps and surprise attacks from enemies. This is compensated by the vast majority of dangers having static spawn points and audio cues, allowing players to learn placement in the levels through (expensive) experience. Completing the game involves surviving eight stages and defeating the final boss, using as many continues as required.

The player has a limited number of lives, separate reservoirs of health and armor, and every stage has a short time limit that can be extended. The player can only attack left and right with a long chained whip, but can do so at any time – i.e. while jumping or climbing – and also throws daggers in a 30 degree upward spread. When poisoned, the player turns a shade of purple and daggers no longer appear, weakening attacks significantly.

The levels are short and may have briefly branching paths, designated by arrows that are colored when leading to the end of the stage, and desaturated when pointing to a side-path for item collection. Additional side-routes in every level through “dungeons” result in bonus points, extra time and zenny. These are clearly identified by a doorway marked "IN" and can only be completed once per level. Losing a life within the dungeon exits the player back to the doorway in the level. At the end of every stage is a mini-boss or dragon boss, and the mini-bosses become regular enemies in later stages.

A signature feature of Black Tiger is the stone statues of old men, revived upon touching them. They may offer helpful hints, useless advice, add extra time, extra zenny, or let the player shop. The shop prices vary depending on platform and region in which the game was released, with the Japan releases (Black Dragon) being the most expensive and the UK releases the least costly. Within the shops it is possible to purchase weapon upgrades of stronger blade variants at the end of the whip, armor upgrades in increments of two up to a maximum of eight, chest keys and antidotes; the items never change throughout the game.

Vases and locked chests are plentiful in every level. These containers may award points, zenny, extra time, trigger traps or spawn enemies. Chest keys and bottles of poison antidote appear as pickups, as there may not be a store nearby. Chests will only open when holding keys, and poison will not afflict the player when holding antidotes. POW pickups are strategically placed in the levels to clear the screen of most enemies when collected.

Special items are also hidden behind breakable sections of walls. These sections can be located by a red puff of smoke - instead of the usual blue - when the player’s daggers impact on the walls. These items normally take the appearance of sprites seen in other Capcom games, such as barrels, bamboo, and the yashichi. These items award points, free armor upgrades, or 1-Ups.

The variety of enemy design is broken up as the game progresses by color palette changes, which indicate stronger variants. In later levels enemies are far more likely to appear from pots and ambush the player.

While most released ports for Black Tiger have been on various computer systems, it was briefly announced in development for the NES, but was never released.

Emulation of Black Tiger outside of MAME manifested in the 1990s with the dedicated emulator Btishger, which became known for excellent playability in all areas except sound accuracy.

The U.S. Gold published conversion for the Atari ST and Amiga was done by Graham Lilley, with artwork redrawn by Taoman Irmak.

In late 2010/early 2011 the game was released on the Wii Virtual Console Arcade in Japan and the U.S., using 60 blocks of Wii memory. Like other VCA games, various graphical, control, and “dip-switch” settings can be tweaked as desired. Changing the video settings to 100%/100% with 2 scanlines gives a reasonably faithful appearance to the arcade game.

In February 2013, Black Tiger was released on the Xbox Live Arcade store and the Playstation Network as part of the first Capcom Arcade Cabinet pack, alongside 1943 and Avengers. 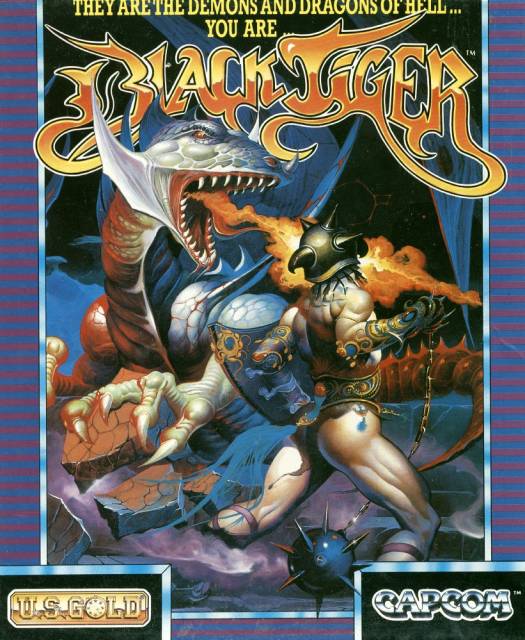