Play as Zeke or Julie through 55 deadly levels of Zombies Ate My Neighbors! Destroy zombies with a squirt gun full of holy water!

Zombies Ate My Neighbors (simply Zombies in Europe and Australia) is a top-down action shooter developed by Lucasarts. The game takes place during some unspecified event that has caused zombies and a whole host of other B-movie style monsters to run amok in a suburban setting. Alone or in two-player co-op, players have to roam a huge number of levels killing monsters and rescuing their innocent neighbors.

The game was originally published by Konami for the Super Nintendo Entertainment System and Sega Genesis on September 1993. On October 26, 2009, it was re-released on the Wii Virtual Console.

The player begins by selecting either Zeke or Julie, and in co-op, the player that they don't choose is controlled by player two. Gameplay is top-down, with fairly simple controls. Players can have one weapon and one item selected at any time, and scroll through these as needed. Most levels see the player dropped into an environment with the objective of rescuing a certain number of survivors. Survivors are stationary, and often placed in hard-to-reach areas. The player has a GPS-like radar that can be activated, displaying the number of survivors remaining and their location when sufficiently close. When the player runs into a survivor, that survivor is deemed as 'saved' and disappears. When no survivors remain in a level, a freestanding exit door appears next to the player, who can choose to further explore or exit the level. Survivors are killed if they are attacked by an enemy; a loud cry alerts the player to a death and an angel floats up from the survivor as part of the death animation. If the player fails to rescue a specified number of survivors, they fail the level.

The environment and enemies vary largely from level to level. Some levels see players facing only one kind of enemy, while others force them to deal with waves of different enemies. Locations range from suburban backyards and shopping malls to horror clichés like castles and pyramids. Each level's number and name is displayed before the level begins. These titles are often done in B-movie style and reflect the content of the level: for example, Level 12: Mars Needs Cheerleaders features only Martians as enemies and only Cheerleaders as survivors.

Weapons are found in the environment, and most are everyday objects. The basic weapon is the squirt gun, which the player always starts with. Other weapons include foodstuffs, such as Icepops, and tools, such as the weedwacker. More far-fetched weapons are also found in certain situations. Killing a Martian will force him to drop his Bubble Gun, whilst the Pandora's Box item can be found in pyramids. Levels contain chests, cupboards, and similar that can be opened to find weapons and items. Most levels contain locked doors, which have to be opened with a Key or otherwise bypassed. A Key works on any door, but can only be used once. Occasionally, levels contain Skeleton Doors, which can only be opened with a much rarer Skeleton Key. Environments also contain destructible walls, which can be identified by the cracks in them. These can be opened with a sufficiently strong attack, such as a Bazooka, or by tricking a sufficiently strong enemy into destroying it.

Most levels do not actually require the player to kill enemies. The player can run faster than most enemies, and evasion is as viable a tactic as firepower. Certain situations do force the player into combat, however, such as the level that forces the player to take down an extremely powerful Giant Baby to obtain the Skeleton Key required to rescue the level's lone survivor.

The player has a life bar and a number of extra lives. The life bar is depleted when attacked by enemies or environmental hazards, but can be restored by using the Med Kits that are found throughout the environment. Extra Lives are earned between levels by score. This makes it in the player's best interests to rescue as many survivors as possible, as rescuing all survivors in a level confers a huge bonus. When a health bar is depleted all the way, the player's character sways dizzily and falls over. An extra life is used automatically, and the player's character reappears with a short period of invulnerability. Dying with no extra lives remaining takes the player to a Game Over screen and then returns them to the main menu. After certain levels, a four-character password is given to the players so they may continue from that level in the case a Game Over occurs.

When the Genesis version was released Electronic Gaming Monthly gave the review scores of 8, 8, 8, 9 and 9 out of ten. Mike Weigand, who gave one of the higher scores, wrote, "The screen layout is like Gauntlet IV (with a black area showing your items). I tend to prefer it that way! Like the Super NES version, this is an excellent game for one or two players, loaded with references to old horror movies!". 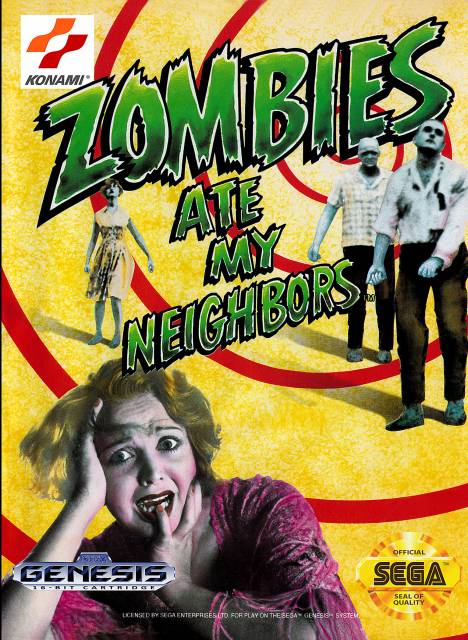