Clash at Demonhead is an action platformer for the NES featuring non-linear gameplay and an absurd story.

Clash at Demonhead (known in Japan as Dengeki Big Bang!) is an open-ended action platformer developed and published by Vic Tokai for the Nintendo Entertainment System in January 1990. The game features non-linear exploration (similar to the Metroidvania gameplay concept), in which players choose their route at many points throughout the game.

The player takes the role of Billy "Big Bang" Blitz, a sergeant in the Special Assault Brigade for Real Emergencies, or S.A.B.R.E. He and his fellow operative Mary have been tasked with the rescue of Professor Plum, a genius who has crafted the doomsday bomb, a weapon capable of destroying the entire world. Bang sets off on his journey, eventually encountering Tom Guycott, the one who plotted the kidnapping. Billy learns that the Doomsday Bomb is controlled by six medallions, which have been scattered around the world, and are being held by the governors of Demonhead,. While retrieving one of these medallions, Billy meets a hermit who helps Billy by teaching him a number of special force powers. During his quest to retrieve the medallions; Billy also experiences mysterious mental problems.

Later on in his journey, Big Bang discovers that these mental discomforts were actually attempts to control his mind by a demon underneath the mountain in the north of Demonhead. The demon is eventually able to take control of one of Billy's allies, Michael, but he is released. The demon kills Tom Guycott, and steals the medallion he possesses. The hermit who assisted Billy earlier tells Billy that this demon can only be destroyed with the Sword of Apollo. Billy obtains it, defeats the demon, takes Guycott's medallion, and attempts to rescue professor . Unfortunately, the Doomsday Bomb has already been completed. As it turns out, Plum  wasn't behind the bomb at all, it was actually created by aliens who created humankind 1,000 years ago, and now having grown disappointed with their creations, decided to bring the world to and end. Luckily, Billy diffuses their attempt with the medallions.

Clash at Demonhead is a sidescrolling action platformer, with mechanics not too different than Mega Man. The game is divided into a number of smaller stages, and each represents a point on an overworld map. There are over 40 routes the player can take in the game, and the player must explore the world in order to progress. The game is non-linear in that the player can choose which direction they go, and the game allows them to backtrack and visit different stages. The player begins with a basic handgun used for combat, but this can be upgraded to stronger weapons, such as the boomerang gun. Upgrades are obtained in a store, along with many other items. Billy, the player's character, can jump very high, is an excellent swimmer, and a great rock climber, and is highly mobile. Throughout the game, the player will also gain new force powers to use in a variety of ways. Clash at Demonhead uses a password system for saving progress.  Clash At Demonhead also sports a unique platforming feature. If Billy happens to fall into one of the many pits in the stages, he does not die, but instead he falls into an underworld. He must fight his way out of this underworld to get back to the route map. Billy only dies when all of his life energy is depleted.
Bionic Commando Whomp 'Em Ninja Kid Mega Man 9 Mega Man 2 Mega Man 7 Mega Man 3 Mega Man 4 Mega Man 5 Mega Man 6 Mega Man 8 Castlevania: Rondo of Blood Hiryu no Ken II: Dragon no Tsubasa Shaman King: Master of Spirits Alundra 2 Popful Mail Phantom 2040 Front Mission: Gun Hazard G.I. Joe: The Atlantis Factor Bionic Commando 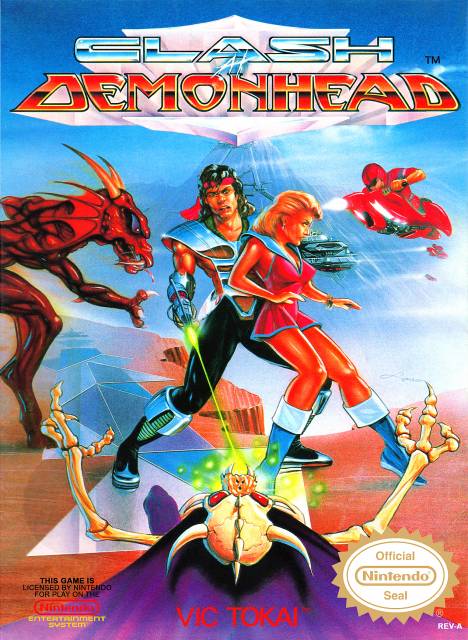