The Chaos Continues is the SNES and Game Boy sequel to the original Jurassic Park.

The original Jurassic Park games on Nintendo's platforms were a huge success. In response Ocean, the development house responsible for the original titles, began work on a sequel.

The version for the Super Nintendo is a standard sidescroller. Upon starting a new game the player is confronted with a menu screen that gives them several missions to choose from. Completing one mission brings them back to select another. Finishing missions progresses the player through the game. The main plot is that the bio-engineering company Biosyn, rival to John Hammond's InGen, dispatched troops to Isla Nublar to take control of the facilities and the dinosaurs. Hammond asks Dr. Alan Grant and soldier Michael Wolfskin to head to the island and stop Biosyn.

The game's arsenal consists of a charging stun gun, machine guns, and shotguns. Utilizing the stun gun is an important factor in the game, because killing too many non-velociraptor enemies results in the island's ecosystem being destroyed, leading to the game over screen.

The Game Boy version is also a side-scrolling shooter, but it unfolds slightly differently. Abandoning the mission structure of the SNES version, the Game Boy version progresses strictly linearly. The game is divided into a series of similarly themed levels called zones. Most zones have two levels which requires the player to gather a set number of key cards in order to open a gate at the end of the level, with the third level being a boss battle.

Interspersed between these normal zones is the occasional T-rex zone, which requires navigating a maze-like level while a Tyrannosaurus chased the player character. Collecting all the keycards in these levels resulted in an extra continue. 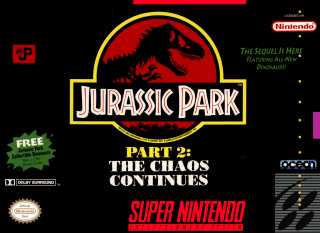