Play as a missile shooting, space traveling mech in this Dreamcast cult classic.

Bakuretsu Muteki Bangai-O (roughly translated as Explosive, Invincible Bangaioh) is a multi-directional shooter developed by Treasure Co., Limited released as a Japanese exclusive for the Nintendo 64 on September 3rd, 1999. The game was later released in North America and Europe under the simplified Bangai-O, though it was exclusive to the Sega Dreamcast rather than the Nintendo 64.

In the game, players take control of a single mecha known as the Bangaioh, piloted by two young pilots by the names of Riki and Mami. The plot is the same as almost every shmup: an evil contraband menace (called the "Cosmo Gang" in this game) are out to destroy Earth and the player must protect it.

However, Bangaioh does have its own unique elements to differentiate it from other shmups of the era. The Bangaioh has two firing modes that are represented by the pilot in control. If Riki is in control, red homing missiles are fired by the "special attack" button. If Mami is in control, blue lasers that bounce off of walls are fired. One can also use a 360 move in conjunction with the special attacks, in which 40-400 shots will be fired in a 360 spurt at all the nearest enemy bullets and enemies, with the amount of shots fired depending on quantity and proximity of the enemies and the enemies' bullets. For homing missiles, the missiles split up and target the nearest enemies and bullets, whilst the lasers automatically hit one target and bounce away.

At the beginning of the level, two 360 attacks are given. A total of 10 can be obtained per level by racking up combo points based on the amount of enemies or enemy ammunition destroyed. Upon reaching 100 combo points or more, the player can choose to gain the attack, refill their life, take a massive point boost, or temporary invincibility. Different levels of these power-ups can be obtained, and are based on how many combo points the player has.

Differences between Nintendo 64 and Dreamcast versions:

The soundtrack to the Nintendo 64 version of Bangai-O was composed by Toshiya Yamanaka and Aki Hata, while the Dreamcast version was composed by Norio Hanzawa (under his alias NON). The soundtrack did not see an official release until 2008, when it was released as a 3CD set titled 'BANGAI-O SPIRITS Audio Collection Plus', which compiled the music from the Dreamcast and Nintendo 64 versions of the game, along with the music from Bangai-O Spirits. 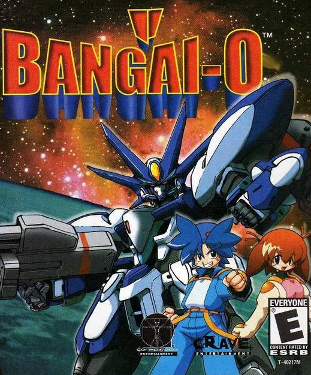