In 1997, Square made a rare departure from its role-playing franchises to produce Einhänder, a side-scrolling, techno-infused, futuristic shooter. Modeled after classic 2D shooters, Einhänder allows players to shoot their way across a variety of levels, destroying waves of enemies, blasting enormous mechanical bosses, and boosting their ships using the power-ups left in the wreckage. For Einhänder, Square intensified this experience by creating moving backgrounds, and by changing the camera angles to create the perception of 3-D combat. While the player was still limited to four movement directions (up, down, left, right), many of the backgrounds could be blown apart and damaged (increasing scores and power-ups, of course). Combined with Square's signature full motion videos, the resulting imagery represented the best of what the PS1 could offer at the time. Arguably more remarkable than the visuals, the gameplay was accompanied by a grinding techno soundtrack composed by artist Kenichiro Fukui.

Given its strong audio-visual presentation, Einhänder received significant critical acclaim in both Japan and North America. Despite the positive press, the game failed to produce strong sales in North America. Some have attributed the mediocre response to the game's lack of a two-player mode, which made little sense for a game modeled after a classic arcade shooter. It did not help that Square failed to promote the game strongly in North America: gamers and critics alike had to wonder whether a company dedicated to RPG's could produce a quality title completely outside the genre.

Like most shooters, Einhänder's plot serves merely as a conceit to drive the action, and to explain why exactly the player must destroy everything in sight. But in as much as it explains the combat, Einhänder is set in a future in which the Earth is at war with the Moon. The game's protagonist, a pilot for the Moon Colony Selene, is tasked with going on a one-man mission to cause as much damage to the Earth's capital as possible before being destroyed. During his raid, he learns that these suicide missions will be shortly replaced by similar attacks conducted using unmanned drones. Nevertheless, the Selene military demands the pilot's heroic sacrifice. Not understanding the reasons for war, the pilot survives the raid on Earth, and decides to return to the moon and take down the military authority that decided to sacrifice him.

Like most shooters, Einhänder made its own variations on the traditional shooter mechanic. Upon starting a new game, players can choose their ship, which configures the starting weapon and upgrade potential. Upgraded weapons come in the form of gun pods, which are cannons that attach to the top and/or bottom of the ship, and fire weapons. Most weapons consisted of standard shooter fare: spread cannons, bombs, homing missiles, and machine guns; however, more unique weapons, such as light sabers, could also be obtained. Players could sort through available weapons, though ammunition for each was limited to a pre-set amount.

From the outset, players are given a number of lives and continues that vary depending on the game's difficulty setting. For the North American version there is no free-play option, which made completing the game a challenge in and of itself. Though not as challenging as competitive shooters like Ikaruga, Einhänder rewards players for repetition and completion, and emphasizes score-based competitive gameplay. Scores are based on a multiplier built through destroying enemy "cores" that appear when enemies are destroyed. Yet just as weapons disappear after use, the score multiplier goes down if it is not actively being increased. 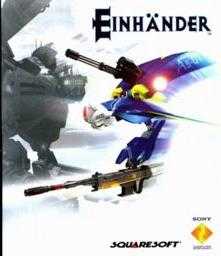