Step into the shoes of the ninja Ryu Hayabusa as he goes on a quest to avenge his father's unexpected death.

Ninja Gaiden is a 1989 action platformer developed and published by Tecmo on the NES. It was renowned for its innovation of being the first game to use cinematic cutscenes to narrate its story (a presentation style that Tecmo dubbed "Tecmo Theater"). It was also well-known for being insanely hard. The story centers around Ryu Hayabusa, a ninja who comes to America to take revenge of his father's death, but soon uncovers a sinister plot threatening the entire world. It was released as Ninja Ryukenden in Japan and Shadow Warriors in Europe.

The game begins with a duel between Ken Hayabusa (Ryu Hayabusa's father) and another unnamed ninja. Ken is murdered, and shortly thereafter, Ryu finds a letter from his father. The letter tells him to search out the archeologist Walter Smith. After making it to America, however, Ryu is quickly captured by a young woman who proceeds to give him a demon statue. It is later revealed that bringing this demon statue to the other one similar to it would summon an ancient demon, and would be sure death for every living thing.

After finding Walter, Walter reveals many things to Ryu, such as the relationship between the Light and Shadow demon statues. However, during their conversation, a ninja jumps into Walter's home and steals the Shadow statue. Ryu pursues him, and manages to retrieve the statue, but upon returning finds Walter murdered, and the Light statue stolen.

Ryu is then confronted by three armed men, who bring Ryu to an interrogation room. A man named Foster begins to explain to Ryu that his intelligence unit has been monitoring a man named Guardia de Mieux (also known as The Jaquio). Apparently he wants to summon the ancient demon. Foster requests that Ryu travels to South America to eliminate The Jaquio and his followers.

Upon reaching the temple, it is discovered that The Jaquio has kidnapped Irene Lew, the young woman seen earlier in the game. The Jaquio offers her safety in return for the Shadow statue. Ryu hands over the Shadow statue, but a trap-door opens and Ryu falls into the low levels of the temple. After making his way back to the top, he finds that his father is still alive, but is possessed by a demon. Upon defeating the demon, The Jaquio is enraged, and proceeds to fire a magical attack at Ryu. Ken jumps in the way to protect his son. Presumably, The Jaquio dies in the ensuing fight. After the fight is over, the two statues form into the powerful demon, whom Ryu destroys.

Ninja Gaiden features fast-paced action-platforming. Ryu must traverse a stage filled with various enemies, whom he must dispatch with his sword. Enemies are usually located in hard-to-dodge places--especially in the later levels. After defeating all of the foes within the level, Ryu will make it to a boss (whose health meter is next to Ryu's throughout the level). Typically, there is no secret to destroying the boss, its attacks are just incredibly hard to dodge making it very difficult for players who have lost health in other parts of the level. Because of this, it will normally take several playthroughs of a level - and memorization of enemies' locations are key.

Ryu also has various power-ups to aid him. For example, one gives him the ability to do a spin-attack when he jumps. This ability, known as Jump & Slash made some boss fights too easy. It is possible to destroy the Kelbeross boss in a single hit, and to destroy the Bomberhead boss' chain weapon with it. This may have been a contributing factor to Jump & Slash's omission from Ninja Gaiden 2. There are also items that merely increase the player's score by different amounts. A very rare health powerup (occurring only two or three times throughout the game) that refills six empty health bars.

A glitch has been uncovered that allows the player to repeatedly attack in mid-air. To activate the glitch, the player must jump into the air and then press the attack button several times. This is an incredibly useful technique against bosses and more difficult enemies. 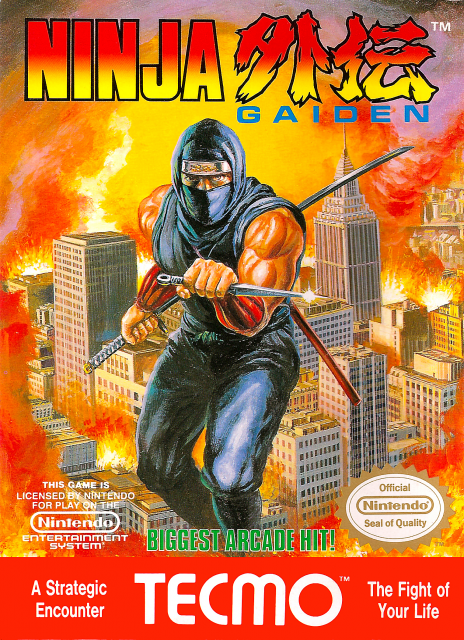