The 1994 sequel to LucasArts' Zombies Ate My Neighbors. Join Zeke and Julie once again as another horrible evil is unleashed upon their town.

Ghoul Patrol is a horror-themed top-down shooter and the follow-up to Zombies Ate My Neighbors. The protagonists Zeke and Julie are once again forced to run around mazes, fighting monsters and rescuing innocent humans before the monsters can reach them.

The plot this time around revolves around a demon that was trapped within a pocket dimension until he was freed by Zeke and Julie reading from a book. They must move through time fighting the minions of the demon lord until they can once again trap him in his interdimensional jail.

The game was released on the Genesis and Super Nintendo in 1994. 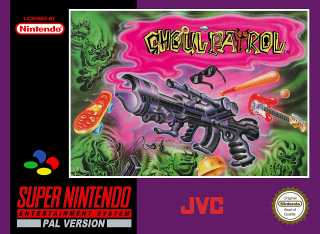