Gothic horror-themed archetypes fight for the right to be "Lord of the Night" in the first entry of Capcom's off-beat second fighting game series.

The first installment of the Darkstalkers series, Darkstalkers: The Night Warriors features a cast of characters that resemble a variety of fantasy horror archetypes (from succubus Morrigan Aensland to warewolf Jon Talbain). The story is that the series' main protagonist, the vampire Demitri Maximoff, is holding a tournament on Earth to see which of the creatures of the night (the "darkstalkers") is worthy to rule the Demon World.

The gameplay builds upon the fighting mechanics of Super Street Fighter II Turbo, adding new gameplay mechanics to the genre (such as enhanced versions of special moves, the ability to block while in the air, and pre-determined combos of normal moves). The series's quick gameplay, as well as its unique character art style (where sprites are less defined and more cartoony), served as the inspiration for other Capcom games of the mid-to-late 90s (including the Street Fighter Alpha and Marvel vs. Capcom series).

Darkstalkers: The Night Warriors later received a port to the PlayStation on March 28, 1996 (as Capcom's first PS1 release, which was later digitally re-released for the PlayStation 3 and PlayStation Portable, both by PlayStation Network, on November 29, 2011). It was also included in the Japan-exclusive PlayStation 2 compilation Vampire: Darkstalkers Collection, released on May 19, 2005.

There are many refinements from Street Fighter II 's gameplay. These include air blocking, crouch walking, and chain combos.

Air blocking was a new feature for fighting games at the time, it allowed characters to jump without fear of being countered. This allowed the attacking player to put more pressure on less aggressive opposition.

Chain combos where introduced in Darkstalkers. Also known as dial-a-combo, chain combos are a string of predetermined normal attacks that will link together.

The character roster of the game are based off of many fantasy horror archetypes, such as Frankenstein's monster, a Sasquatch, and a mummy in a sarcophagus. Like other fighting games of the time, the cast of characters all came from different parts of the world (as shown in the "world map" on the character selection screen). 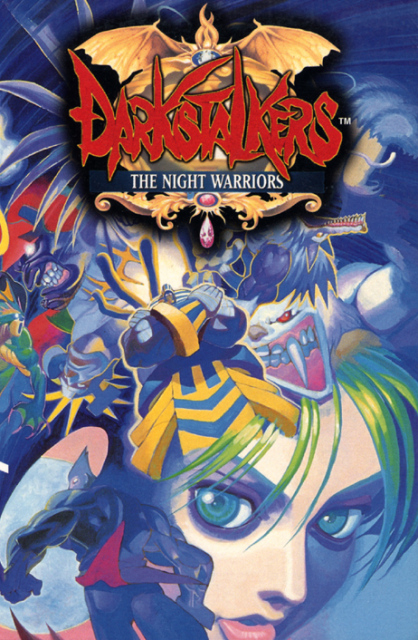