A sci-fi run and gun game where the player controls Hiro, the protagonist of the game as he tries to get through six levels infested with mechanoid, metal-clad enemies.

Switchblade II is a side-scrolling platformer-action game set in a dystopian sci-fi world with an art style that is partially based on manga and anime. It was released for the Atari ST and Amiga home computers and was later made available on the Atari Lynx handheld.

Unlike its 1989 predecessor Switchblade this game is not the work of Simon Phipps from Core Design who split from Gremlin in 1990. Instead the game has been designed by George Allan and Paul Gregory both of whom previously worked on Gremlin's shoot'em up Venus the Flytrap and took on the sequel to Switchblade. The work on the follow-up started in August 1990 and influences included games like Capcom's Strider or Shinobi. Some of the feel of Simon Phipps original game has been kept but great changes have been made along the way. The main sprites are larger, the levels are bigger and the graphics are richer in variety. So except of having the same graphical style for the first level this game differs from the prequel. There's also a hidden shoot'em up in the code of this game and it's activated by typing CHROME into the title screen.

Centuries ago Hiro, the last of the Blade Knights, defeated Havok and saved the Cyberworld from his evil. Peace was restored and the Blade Knights, acting as the defenders of the people, were a revered and respected part of the community for a long time.

Many years went by and those who were born and raised in peace started to question the right of existence of the Blade Knights. They began to regard the Blade Knights as a bunch of wasters taking valueable food and shelter from the community and giving nothing in return since there were no threats or any villains to be protected from. The scorned Blade Knights decreased in their number until over time they completly disappeared.

But there came a day when a volcano on Cyberworld became active and its eruptions and earthquakes destroyed many villages and killed thousands of people.

Then they found a message from Havok in which he proclaims his return and calls the population to submit to him and accept him as their new leader and master. If they do not obey him then the volcanic eruptions and earthquakes will continue until all are destroyed.

The people noticed that Hiro didn't defeat Havok, who has been waiting the demise of the Black Knights before returning. Be defenseless to Havok they turned in the last hope to the descendants of Hiro who continued to bring up the young of their family in the ways of the Blade Knight. A young man with a cyberarm, also called Hiro, is the only living pearson brought up as a Blade Knight and the last resort for Cyberworld. He has now to cross many landscapes before he reaches the volcano where he can face Havok.

The player must guide Hiro through six levels before the final encounter with Havok. Each level is been made up of 80 to 130 screens(over 600 screens in all) and has an end-of-level boss who drops a piece of the sword Fireblade when defeated . After beating the five bosses and collecting the five fragments of the Fireblade the sword can be reassembled and like in the prequel Havok can be destroyed therewith once again.

The main protagonist can walk in two directions, jump, crouch and climb ladders. By pressing the fire button on the joystick Hiro's cyberarm will fire the current weapon. To reach higher located platforms Hiro can perform a superjump by holding the stick down and then flicking it up. The enemies Hiro will face can be killed in a close combat with a knife or with long-range weapons as soon as ammo is available.

Destroyed enemies will drop a round orb which should be collected, as these will increase the amount of money that Hiro is carrying. This money can be used to buy better weapons, extra lives, energy and other things available in the shops. The shops can be entered through white glowing doorways that appear at some points in the game. Walking into this will take the player to the shop screen where various extras and add ons for the weapons will be offered.

The energy bar displayed in the left bottom of the playing screen can be replenished either by collecting food (Hamburger, Hot Dog, Pizza) or in the shop in exchange for money. The second bar in the right bottom of the screen shows the remaining amount of the current weapon used. Fresh ammo can also be collected in the game or be bought in the shop. If Hiro runs out of ammo for the current weapon he has to combat with his knife which he carries with him at all times. But it can only be used in close combat.

Weapons & Items in the Shop 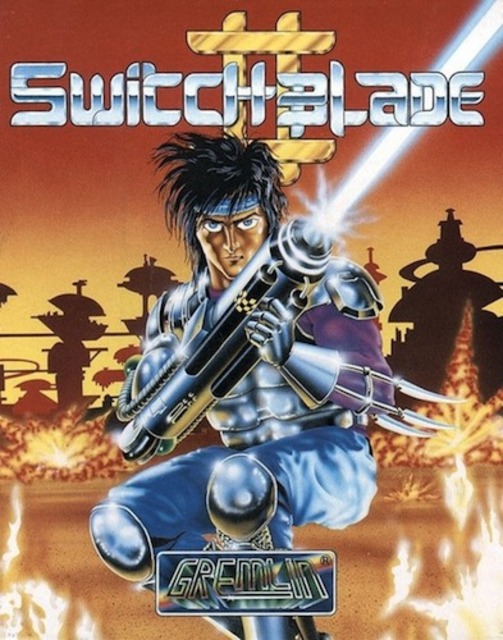