A bloody run-and-gun platformer based on the eponymous collectible card game.

Doom Troopers is a 1995 action platformer released by Playmates Interactive for the Super Nintendo and Sega Genesis. The game is based on the Mutant Chronicles Doom Trooper collectible card game.

The gameplay is similar to Contra, and features two player co-operative play. Despite the T rating, the game is surprisingly bloody and violent, especially for the time. When enemies and players are killed, limbs and heads are commonly blown off. Like the game Donkey Kong Country, the player and enemy sprites are pre-rendered 3D. 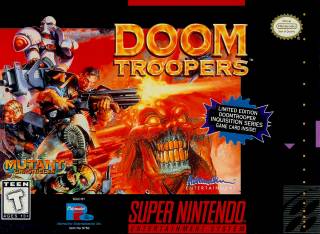