Nocturne is a survival horror game set in the 1920s and 30s. As a member of a secret government organization "The Stranger" investigates sightings of zombies, werewolves, demons and other monsters and fights them all over the world.

Nocturne is a third-person horror action game developed by Terminal Reality and released Oct. 31, 1999. The game uses the "Nocturne" engine which was later used in the video games based on the movie The Blair Witch Project: Rustin Parr, The Legend of Coffin Rock and The Elly Kedward Tale. The game's controls and fixed-camera perspective are similar to those found in Resident Evil and Resident Evil 2. Players take control of a trench-coat wearing man known simply as "The Stranger". He is one of the best operatives of an secret U.S. government agency known as "Spookhouse", whose prime objective is the eradication and extermination of monsters around the globe. The game takes place over four individual "volumes" or episodes which are available from the game's start. Each episode has a self-contained story with some fictional continuity.

Because Terminal Reality owned the North American trademark to the name "Nocturne", when the unrelated video game Shin Megami Tensei: Nocturne was released in the United States, the creators were forced to put a note on the game's title screen crediting Terminal Reality with the rights to the word.

Spookhouse is an organization that not only sends its operatives to destroy monsters but also collects numerous relics and artifacts that it stores for safekeeping in its Trophy Hall. Spookhouse is operated by a man known as the Colonel, a bald man with an eye patch and a hook for a left hand. Within Spookhouse the Stranger encounters other characters such as:

Volume 1: The Dark Reign of the Vampire King

The Stranger is assigned to travel to Germany with a half-vampire associate that he loathes called Svetlana. The remote village of Falkenburg has been attacked by werewolves and the two operatives are sent to investigate the matters. The sentinels (zombies and werebats) of Count Voicu constantly terrorize the village and The Stranger and Svetlana manage to slay the beasts. They learn from the mayor that Count Voicu has kidnapped all of the village's daughters and taken them all to Castle Gaudstadt.

Volume 2: Tomb of the Underground God

An agent known as Hiram, who can't read minds but can sense thoughts directed towards him briefs The Stranger on his latest mission. They're aboard a train headed towards Texas. The Stranger is being sent to Red Eye, Texas where the sheriff claims that there are zombies and werewolves on the loose.

A German scientist who has immigrated to the U.S. has developed the technology to resurrect a body from the dead. The gangster, Al Capone, is utilizing this technology to create a gangster zombie army. The Stranger is sent to Chicago to investigate the matter further and see if the scientist and Capone can be stopped.

Volume 4: The House on the Edge of Hell

Hamilton Killian, a retired veteran of Spookhouse, has requested the agency's top operative be sent to France. A graveyard near Killian's place of retirement has been disturbed by the undead and devilish imps as of recent and Killian does not believe he'll be able to handle the matter on his own.

Nocturne has an aggregate score of 75% on Gamerankings. Upon its release the game was praised for its graphics and stylization but overall it was criticized for poor control and camera issues. At Gamespot it earned a 7.0; Greg Kasavin wrote that the game had an "intriguing premise" and strong "horror movie" feel but that its camera angle cuts and incessant action led to it being a poor game. Gamerevolution gave the game a C stating that the graphics were worth experiencing once but that the gameplay was too buggy and unresponsive to be recommended. 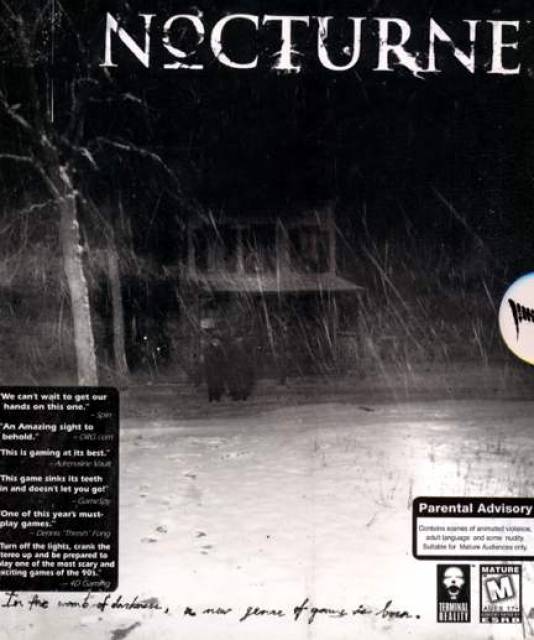