Spyro: Year of the Dragon

Spyro: Year of the Dragon is the third game in the popular Spyro the Dragon series and the last to be made by Insomniac. In this adventure, Spyro is tasked with getting dragon eggs back that have been stolen by the evil Sorceress.

Spyro: Year of the Dragon is the third installment of series, developed by Insomniac before they sold the rights of the franchise. The story follows the adventures of Spyro the Dragon, and his dragonfly companion Sparx. The big new feature of this game is the Spyro's friends are also available as playable characters in their own special areas, each with different and useful abilities.

Every twelve years, new dragon eggs are delivered into the realm of the dragons. This time around, an evil sorceress, her army of Rynocs, and apprentice, Bianca, have stolen the eggs. Spyro and his friends are the only ones who can retrieve the eggs, and stop the Sorceress' goals. As Spyro pursues the thieves responsible, he discovers a realm, called Avalon, which was once a home for dragons, but is now the place where the Sorceress resides. Spyro visits each forgotten realm to retrieve the eggs, with the help of different playable characters (Sheila, Sgt. Byrd, Bentley, and Agent 9). It is later revealed that the Sorceress is planning to use the wings of the baby dragons to create an immortality potion. This new facet of information forces Bianca to change sides and aid Spyro in stopping her. Spyro is finally able to kill the sorceress, and deliver all the baby dragons to the Dragon Kingdom.

The game spans four homeworlds which act as stations to other portals. Each Homeworld contains eight portals to separate levels: four standard levels, a speedway, a freed character from Moneybags' level, a boss confrontation, and a Sparx level. The four homeworlds and levels are:

The levels found in Sunrise Springs are as followed:

The levels found in Midday Garden are as followed:

The levels found in Evening Lake are as followed:

The levels found in Midnight Mountain are as followed:

In a departure from the first two games, Insomniac introduced four new playable characters that can be unlocked as the player reaches each of the four worlds.

Sheila allows the player to jump to new heights. She is able to double jump and even super jump in order to reach extremely high areas. Her attacks involve kicks and a stomp which can be used following her jump.

Sgt. Byrd is a winged soldier able to fly and unleash rocket attacks from launchers attached to his sides.

Bentley the yeti is armed with a massive club that he can use to crush enemies that stand in his path. He is also able to move heavy objects such as crates.

Agent 9 is a space monkey who is equipped with a laser weapon that he names 'Mr Laser Blaster'.

All cheat codes must be entered in the pause menu

Change skateboard into squid - Up, Up, Left, Left, Right, Right, Down, Down, Square, Circle, Square

The ESRB rated the game Everyone for Comic Mischief. 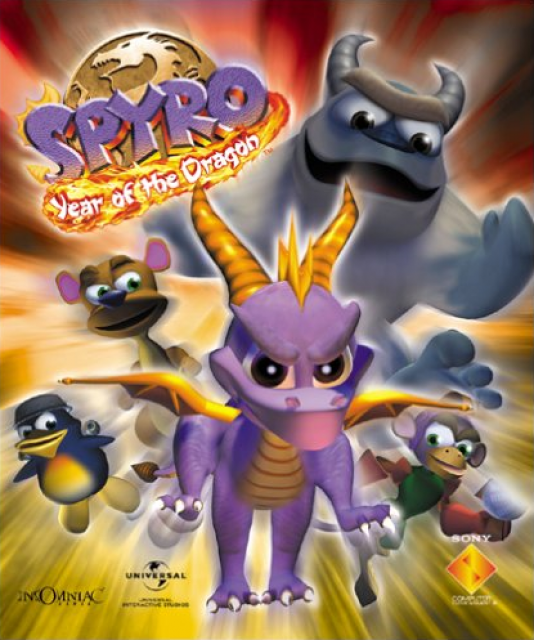