An Arcade game released by Taito about a priestess named Sayo-chan who must rescue the gods of fortune from monsters.

KiKi KaiKai ("Mysterious Ghost World") is a scrolling action/shooter featuring the shrine maiden Sayo-chan as she fights a horde of youkai and oni in a quest to recover the Gods of Fortune. It is a precursor to the Pocky & Rocky games for the Super Nintendo.

Sayo-chan/Pocky makes her way across various levels, changing directions occasionally, and using either a wand or scrolls to exorcise the unruly spirits she meets. She can only get hit once before dying, though some enemies will grab her instead to slow her down.

KiKi KaiKai was adapted for the Famicom Disk System as KiKi KaiKai: Dotou-Hen in 1987, which also included a two-player mode, and for the PC Engine in 1990. It was also included in a number of Taito Arcade game compilations, including Taito Legends 2 for the PS2, PC and Xbox which was also the game's first release in the US and Europe. 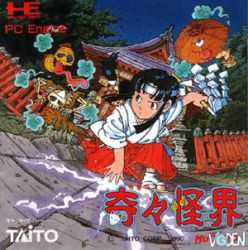