A first-person shooter where the player is stranded on the alien world Na Pali, ruled by the oppressive Skaarj, and must find a way off the planet.

Unreal is a first person shooter game jointly developed by Epic Games and Digital Extremes. It was published by GT Interactive for computers running Mac OS or Microsoft Windows. It has a sci-fi theme and is heavily influenced by id Software's Doom and Quake.

It was a major hit for Epic Games and helped boost the company's profile, and would lead to multiple sequels including the well-acclaimed multiplayer-focused Unreal Tournament (which itself saw multiple sequels). More notable is the influence Unreal's engine would exhibit, becoming a popular tool for developers.

The protagonist, Prisoner 849, is a prisoner on a spacecraft called the Vortex Rikers. The ship is pulled into the orbit of the planet Na Pali, which is inhabited by a primitive civilization known as the Nali, and crashes on the planet's surface. After the ship crashes, it is attacked by a savage and technologically-advanced race of aliens called the Skaarj and 849 wakes up from unconsciousness to find everyone on the ship killed and most of the ship destroyed. Escaping the crashed spacecraft, 849 makes his way around Na Pali in search of surviving humans and a way off the planet. Prisoner 849 fights through mines, caves, Nali temples, Skaarj installations and the otherworldly Nali Haven as they look for a way home. Along the way, the player is hunted by the Skaarj, who have enslaved the native Nali in order to mine the precious mineral Tarydium. After fighting through the Skaarj and their alien minions and helping the oppressed Nali, Prisoner 849 finally finds a teleporter to the Skaarj Mothership and destroys its main reactor, killing its power. With the Mothership successfully sabotaged and about to explode, 849 faces the Skaarj Queen and, upon killing her, launches into orbit above Na Pali in an escape pod as the Mothership detonates. Players are left with the impression that they will be left floating in space for some time, with a small chance of rescue. Fortunately, this is not the case, and Prisoner 849's adventures continue in the expansion pack, Return to Na Pali.

The protagonist of the game. He or she was being transported aboard a prison ship when a Skaarj attack left them stranded on the alien world of Na Pali. The player has the option of changing to several different male and female skins for Prisoner 849, though in Return to Na Pali, the character has a male voice.

Instinctive hunters capable of using numerous weapons and endowed with superhuman strength. They are equipped with huge retractable claws, and come in many varieties. Some are known to wear armor.

Amphibious adaptations of the Skaarj, they are deadly on land and in the water. They have razor-sharp claws and produce a flesh-eating projectile saliva.

Humanoid bio-engineered hunters. They're very aggressive and are equipped with forearm-mounted machine guns and missile launchers.

Hunting assistants employed by the Skaarj. Their intellect is quite limited, though they use their concussion staffs with considerable skill.

Profoundly unintelligent creatures engineered by the Skaarj for the sole purpose of destruction. They are extremely aggressive but incredibly slow moving.

An extremely aggressive and gargantuan colossus, native to Na Pali. It hurls boulders with incredible accuracy and will smash and tear apart anybody who gets within reach of its long arms.

The former rulers of Na Pali, now enslaved by the Skaarj. They are timid and pacifistic but are quite willing to help those who help and protect them.

The default weapon in the game. It fires small plasma bolts with it's primary fire, while it's secondary charges up the weapon for a few second and fire a much larger shot, which also deals splash damage. It has regenerating ammo, giving 849 unlimited shots. This weapon can "evolve when we pick up dispersion pistol power ups, the primary fire will use more ammo and the ammo supply will be upgraded. however the secondary fire stay the same.

This weapon was remade in Unreal 2, with no upgrade possibilities, it was named as LEPEW-13 and only has 8 shots and a faster energy recovery than this model.

A basic weapon that can be found everywhere. It fires very accurate, but has a slow fire rate. 849 can use its secondary fire to hold the gun sideways, allowing them to fire it faster but with less accuracy.

It is the gun that later became the Enforcer.

The Stinger is a Crystal-firing minigun. It fires very fast. The secondary fire will unleash a volley of five shards instantly, much like a shotgun.

The ASMD can fire railgun-like shock beam, which can be fired from large distances, making it a good alternative to the sniper rifle. It can also shoot a big slow-moving plasma ball. If both are used in a combination, it'll create a massive blast, which has been given the term "Shock-Combo" - simply shoot the slow moving plasma ball with the shock beam. It is a difficult technique that will make a player deadly if they pull it off.

A combination rocket launcher and shotgun, the Eightball can load up to six rockets at the same time and fire them all in a deadly cone. With the secondary fire, 849 can even turn these rockets into jumping grenades. 849 can load up to 6 grenades as well. As a bonus, the rockets can also lock onto any threat, if the wielder keeps a steady aim over them for a short period of time. When loading up the rockets, 849 can hold the secondary fire and they will all fire in a tight circle.

The equivalent of a shotgun and a grenade launcher combined. The Flak Cannon can unleash a burst of molten shrapnel, making it ideal for cleaning out smaller rooms or tight corridors, since its shrapnel also bounces off walls. If the player is in a much bigger and more open environment, the Flak Cannon can fire a huge shell of metal, which will explode into molten shrapnel on impact.

A Skaarj hunting weapon that is great for decapitation. It fires razor blades out in a straight line, which have the ability to bounce all surfaces. The secondary fire mode fires more rapidly and allows the player to curve the blades, which also bounce off surfaces.

The Biorifle can disperse blobs of toxic sludge which can stick to any surface, including enemies. It can be charged to up create a bigger blob. Completely useless except as a novelty.

This weapon is a sniper rifle. It fires high powered shells and can decapitate monsters.

This weapon is a twin rotating barrel minigun and fires very fast. Each fire mode have a different firing speed, with primary firing at moderate speed and more accurate, while secondary fires very fast and inaccurate.

Along with the standard single-player campaign, up to 16 players can play in traditional player-vs-player deathmatch. 10 maps were included with the game, with 6 added in the Mission Pack.

The Fusion Map Pack is the only official map pack released by Epic and is not included in any of the game's subsequent re-releases. 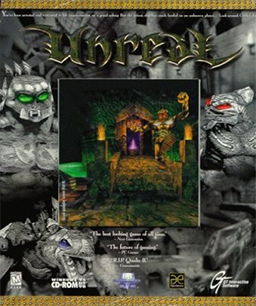