Only one man can stop an evil corporation from taking over all of Japan with an army of demons. He is the insatiable Shadow Warrior. He is Lo Wang.

Shadow Warrior was released by 3D Realms in 1997, following in the wake of the wildly successful Duke Nukem 3D. Intended as a spiritual successor to Duke 3D, Shadow Warrior also used the Build Engine and featured an arsenal of over-the-top weapons, hordes of monstrous enemies to violently dispatch, discreet keycard-ladden maze levels, a wise-cracking protagonist, and a crude sense of humor. Despite having more content than Duke Nukem 3D, including more enemies, weapons, levels, and technological features (like drivable vehicles), Shadow Warrior never achieved remotely close to the same success or enduring legacy as Duke Nukem 3D. Aside from a couple of expansion packs (see Expansion Packs section below), no subsequent Shadow Warrior games have been made.

Lo Wang worked for Zilla Enterprises, a multi-industry company with control in every major industry, but as he discovered Master Zilla's demonic scheme to rule Japan, using creatures summoned from the dark side, Lo Wang quit. Master Zilla soon realized that Wang was too powerful, and unleashed his demonic creations to kill Lo Wang.

Each key or keycard will unlock all doors in the current map of the corresponding color. Keys are not lost after use, but cannot be carried beyond the map in which they are found.

Before the release of Shadow Warrior, 3D Realms started working on 3 expansion packs for the game, however the disappointing sales made them drop the projects.

Two of the three expansion packs can now be downloaded free of charge. 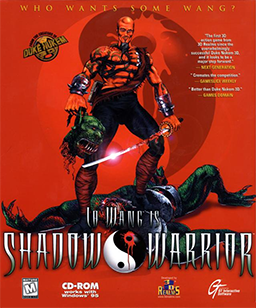