A young boy and his friends must embark on an epic journey of friendship and love across the planet of Lunar.

Lunar: Silver Star Story is an epic story of friendship and love that revolves around a young child named Alex, who dreams of finding the four Dragons and becoming the next Dragonmaster, protector of the Goddess Althena.  Alex is obsessed with the legend of Dyne, the last known Dragonmaster who disappeared 15 years before the beginning of the story.  Alex, his adopted sister Luna, his best friend Ramus, and his flying, cat-like companion Nall set out towards the White Dragon Cave and spark off an adventure of epic proportions.  Along the way, they meet new allies who join them in their quest, as well as the Vile tribe, who loathe the Goddess Althena and will stop at nothing to hinder them.  The party unravels the tragic history surrounding the events that took place 15 years earlier, and as the situation becomes more dire, friendships will be tried, allies will become enemies, and amazing revelations will shake the foundations of the characters' beliefs.

The "Complete" version of Lunar is a remake of the Sega CD classic Lunar: The Silver Star. The remake was released in two different versions for the Sega Saturn in 1996 and 1997 in Japan.  It was later released in on the Sony Playstation in Japan in 1998 and North America in 1999.  The remake included almost an entirely new soundtrack, over 40 minutes of hand- drawn anime FMV, and multiple altered plot elements.  Additionally, the Complete version featured a redesigned overworld map free of random encounters, fewer confusing dungeons,  and an additional dungeon.  Other changes include an alteration to character progression with the elimination of separate "magic experience", making saving free instead of costing the aforementioned magic experience, and linking the progression of new abilities to character levels instead of magic experience.  The box itself also came with plenty of extras, including a "making of" CD, the complete soundtrack, a hard bound instruction manual, and a cloth map of the world. The game also released with multiple different art on the game CD's in (at least) 3 different variations.

Alex is a young boy from the town of Burg.  He is obsessed with the legend of the Dragonmaster Dyne and strives to follow in his idol's footsteps.

Luna is a young girl from the town of Burg, and the adopted sister of Alex.  She is gifted with an incredible singing voice that can draw magic from an unknown source.

Ramus is Alex's best friend and the son of the Mayor of Burg.  Ramus is obsessed with money, but he is also a loyal friend to Alex that will support him in any situation.

Nash is an egotistical elitist from the magical floating city of Vane, and a powerful mage.  Nash is completely infatuated with Mia Ausa.  Although he's not afraid to gloat about his superior intellect and magical abilities, he often gets embarrasingly in over his head.

Mia is the daughter of Lemia Ausa, who is the leader of the Mages' Guild in Vane and one of the original Four Heroes.  Mia is intelligent and gifted in the ways of magic.  Despite her prestigious status, she is a shy and kind, if not reclusive, girl.  All of the students of the magic guild idolize her.  Lately, her mother's odd behavior has become more and more of a worry for her.

Kyle is a brash, sexist bandit who guards the Nanza barrier.  However, when he's not "helping" people cross the Nanza barrier, he can often be found in some bar, getting drunk and fighting the locals.  His relationship with Jessica is constantly tested because of his lewd, womanizing behavior.

Jessica is the tomboy daughter of one of the last of the Four Heroes, Mel,  the Governor of Meridia.  However, she never shows her wild side in public appearences.  Although she is studying to be a priestess of Althena, she often ignores her studies and gets into trouble, usually because of her rocky relationship with Kyle.

The Gameplay in Lunar slightly varies from other turn-based RPGs.  Both character placement and the ability to move characters around the battle areas allow for many strategically helpful and dangerous scenarios.  Area effect attacks can hit all targets in a certain area, and enemies and allies alike can be knocked around the battlefield by attacks.

Although the game received critical acclaim for its story, characters, and great voice acting (which was a rare feature for a JRPG in this era), reviewers complained of its dated, 2D graphics and old-school gameplay mechanics.  Still, Lunar: SSSC is still considered one of the best RPGs of all time by fans.
Lunar Legend Lunar: The Silver Star Thousand Arms Suikoden Suikoden II Blue Dragon Breath of Fire IV Lufia & the Fortress of Doom Grandia Dragon Quest VI: Realms of Revelation Growlanser Generations Final Fantasy IV: The Complete Collection Child of Light Final Fantasy VII 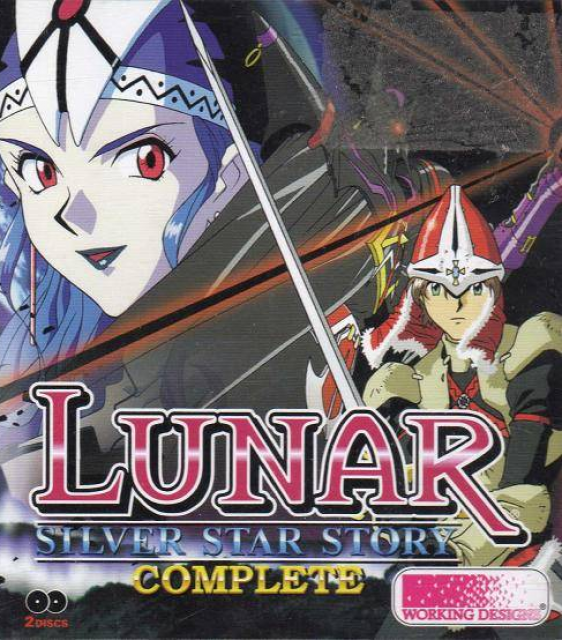