Turrican II is an epic shooter featuring a ton of exploration, colorful graphics and a pumping synth soundtrack to boot.

Turrican II is a side-scrolling shoot-em-up developed by Rainbow Arts Software and first released in 1991 for the Commodore 64, near the end of the platform's lifespan. The Amiga and 16bit versions were developed by Factor 5, who would develop future titles in the series. Highly popular in Europe, Turrican II was acclaimed for its soundtrack, graphics and gameplay, which pushed the Commodore 64's hardware to its limits. The game follows a soldier who uses an advanced exoskeleton to seek revenge on behalf of his fallen comrades. Chris Hülsbeck does the soundtrack for this game. The Amiga version the most well known among the Turrican community as it takes advantage of the stereo sound. The soundtrack mixed techo with classical.

Turrican II is notable for it's fast-paced gameplay and high level of difficulty. A platform based shooter, the game features weapons upgradedable through pickups well as the ability to shoot in a full 360° motion. The game contains several similarities to the game Metroid, featuring large levels which can be explored in a non-linear fashion and the ability to turn into a ball and place bombs. Unlike Metroid however, each stage has an end, with an elaborate boss battle taking place at the end of each one.

At stages throughout the game, it ceases being a platformer and becomes a R-Type style shooter. Though unlike R-Type the levels contain a vertical aspect to the level design. 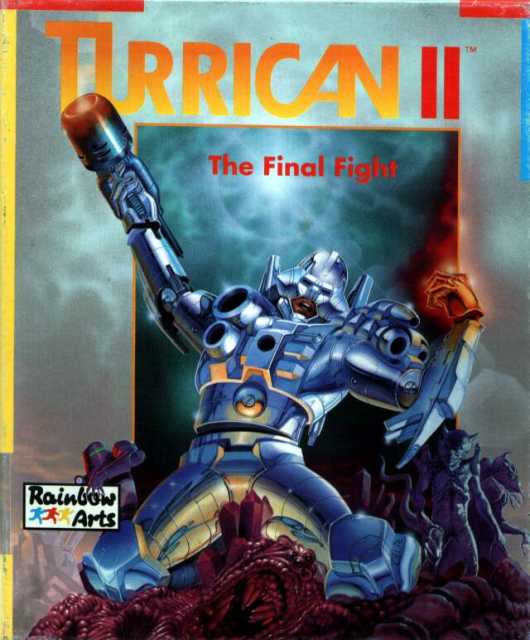