Continuing where Supreme Commander left off, players can now make use of the mighty Seraphim or defend humanity from these new invaders with the remnants of the returning factions.

Supreme Commander: Forged Alliance is the first stand-alone expansion pack to 2006's Supreme Commander. It is a direct sequel to Supreme Commander, picking up immediately after the events at the end of the previous title. Many of the aspects of Supreme Commander remain the same, but there have been tweaks to certain units, including changing costs and damages or changing which "Tech" level they first appear, in order to balance the game. The most significant addition is the introduction of the Seraphim, a race presumed dead in Supreme Commander, but teased at resurfacing after the events at the end of the first game. In addition to the arrival of the Seraphim, each of the original races has received a new experimental unit, bringing the total for each race to four. The core elements of the game remain intact, but players may have to adjust to the revisions and balancing changes that have been introduced in this title. This Expansion pack adds an entirely new campaign in which the 3 existing factions make a fragike alliance in order to battle this new enemy. Unlike the old missions, these new missions can be played by any of the 3 races with all units unlocked from the first mission.

The Seraphim are a species of aliens that humanity first encountered during the Old Empire's "Golden Age." They taught the first colonists that made contact their belief system, called "The Way." Unfortunately, due to paranoia that built within the empire, an order was made to attack and destroy the Seraphim and shortly thereafter, the Seraphim disappeared from the Galaxy, presumably wiped into exctintion by humanity. This was not the case. Instead, the Seraphim had retreated to the Quantum Realm to plan their invasion. Shortly before the Black Sun fires at the end of Supreme Commander, the leader of the Seraphim contacts the central AI, or "Quantum AI," of the Cybran and reprogram it to spy on Dr. Brackman. Meanwhile, the Black Sun fires, weakening the barrier enough for the Seraphim to open a rift in the barrier that previously existed between the Quantum Realm and the galaxy. The return of the Seraphim prompts a schism within the Aeon Illuminate, dividing it between those who remain loyal to the old leaders of the Aeon and those who choose to side with the Seraphim. The invader's forces lay waste to many of the UEF's main worlds, killing billions, and thanks to the QAI, the Seraphim are able to launch many devastating battles against the Cybran, crippling them as well.

This unexpected and devastating assault has forced the remnants of the three factions to band together under a single banner, the "Colonial Defense Coalition," in order to repel the Seraphim and save humanity.

While some new units were introduced to each returning faction to further differentiate them, the most prominent additions were new experimentals for each race.

brings a new front for players to explore. The Novax is a two-part experimental, with the control station being the part that is actually queued to build. Upon completion, the "Novax Center" releases an Suborbital Satellite, capable of drifting across the map without interference. This satellite is invinicible to any types of damage, and the only way to destroy the Novax is to destroy its control center, immediately grounding the satellite. The Novax is armed with a powerful laser weapon, albeit dwarfed by those used by other experimentals. Due to the Novax's invulnerablilty, it fires rather slowly, doesn't move quickly and will have trouble disabling heavy shields without aid.

is an amphibious crab-like unit, dwarfing even the Galactic Colossus in durability. On land, its firepower is comparable to the Colossus as well, capable of destroying all but the heaviest units with ease. Underwater, the Megalith is one of the strongest naval units, capable of destroying an Atlantis by itself, unlike other experimentals. Its speed also improves significantly in the water, making it one of the deadliest naval units in the game. The Megalith also has some basic anti-air defense qualities, but it isn't capable of dealing significant damage to most air units. Unique to the Megalith is its ability to lay "eggs." These "Megalith Eggs" can be built into a single unit and it does not hinder the Megalith's combat abilities, unlike all other experimental with production abilties. It is the single strongest land unit in the game, and is incredibly expensive and time consuming to build.

is perhaps the most unique experimental. It has no direct offensive purpose, instead the Paragon is a generator that produces a near-infinite stream of resources once online. It is not without its drawbacks however. The Paragon has the least health out of every experimental and if it is destroyed, it explodes with the force of a strategic nuke, decimating anything around it. It does not produce a set amount of resources, instead it will increase its output to meet the demand that the player uses, to a maximum of 10,000 Mass and 1,000,000 Energy. It effectively "freezes" a player's resource output at 10, no matter what a player queues. This allows for incredibly fast production of other units, including other Paragons, turning the Aeon into an economic powerhouse.

have only 3 experimental units, although all of them are devastatingly powerful. The 'Ythotha' is a huge mech, comparable in size and power to the Aeon's Galactic Collusus. It bears a large visual resemblance to the Seraphim ACU. Upon death, the Ythotha leaves behind what appears to be a large ball of lightning, which will stay around for a limited duration and attack any enemy units that get within range.

They have a massive, slow moving bomber called the 'Ahwassa' (nick names the 'Ass washer' by players since no-one's entirely sure how to pronounce Seraphim unit names). The bomb it drops is incredibly powerful, capable of two hitting an enemy commander. The bomb's explosion will also penetrate water, allowing it to destroy submarines. Due to it's slow movement and enormous turning circle, coupled with the power of tier 3 fighters, two or three drops is usually all you can hope for from the Ahwassa.

Their final experimental is the 'Yolona Oss', an experimental strategic missile launcher. This unit is a true game ender if you can manage to build one. Once built, it takes just one minute to construct its missile (for reference, the Seraphim's standard strategic launcher will take five minutes to build one missile). The inner ring damage of the explosion is one million, thirty thousand more than a standard nuke, with the radius of the inner ring being a little under twice the size. Due to the missile's size and strength, two strategic missile defense silos are required to stop it. 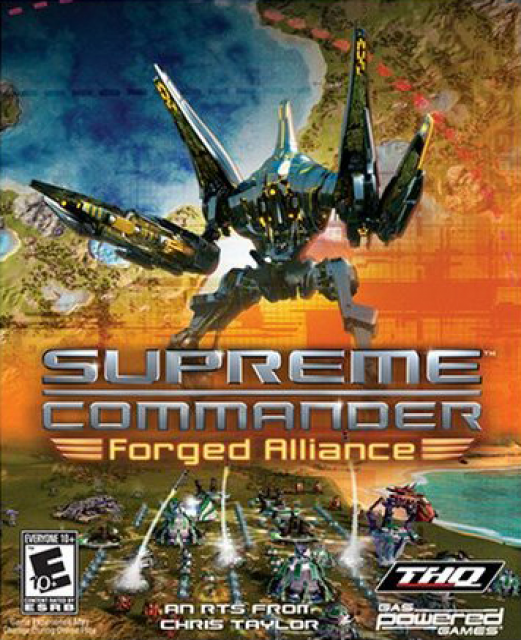