This run and gun game was made by Sunsoft and takes place in the distant future. In this game, Jay McCray sets out to avenge his father's murder at the hands of terrorists.

Journey to Silius is a run and gun platformer developed by SunSoft for the NES.

It was also released as Raf World (ラフワールド) in Japan, in which it is pronounced ["rough world"].

The player takes the role of Jay McCray in the year 0373 of the new space age calendar. Earth has been overpopulated, which has led to the creation of space colonies to which people emigrate. Jay's father is responsible for the development of Space Colony #428 in the Silius Solar System.

As Jay is getting ready to leave Earth and join his father, the entire colony suddenly explodes. A few days later, Jay finds a floppy disk in his fathers home containing plans for the colony, and a message from his father telling Jay that if terrorists should destroy the colony, he should finish what his father started. When Jay sees this, he heads out to the colony to seek revenge on his fathers death.

Journey to Silius is very similar to the Mega Man games. The player starts with two weapons: their regular gun with unlimited ammo, and something similar to a shotgun. They receive a new gun after defeating a powerful enemy at the end of each level, except for the last level. After collecting the weapon the screen changes and the boss shows up. The bosses are usually huge sprites, covering a significant portion of the screen with flashing weak points to shoot. The boss doesn't have a health-bar, but after a certain number of hits it explodes, at which point the hero's health and ammo bars replenish and the next level starts.

The guns are in the game include:

Journey to Silius was critically praised for its excellent music, composed by Naoki Kodaka and four other composers. He used an unusual approach to making the music. The bass tones were made of sampled sounds rather than the regular square and triangle waves, giving more depth and detail to the music. Some songs have themes resembling The Terminator theme songs because of the games history with the Terminator license, most notably the song playing during the intro.

A sound test is hidden on the title screen which can be accessed by pressing the B button 33 times and then pressing Start. The sound test screen also has an option for the number of continues to play with.

Journey to Silius was originally supposed to be a game based on the first Terminator film. Proof of this fact lies within an issue of Electronic Game Player. However, SunSoft was stripped of its license prior to completing the game. This could be attributed to the impending production of Terminator 2: Judgement Day the film.

The production company took the license and gave it to the LJN toy company to make a game based on the second film in the franchise. SunSoft then had to edit the game to remove all references to the Terminator film.

However, there are still little parts in Journey to Silius that suggest its convoluted genesis. For example, the prologue music during the intro cut scene has the same bass heavy melody of The Terminator theme song from the first film. Also the first boss after stage one has a helicopter than, without the redecorated front and chopper blades, closely resembles the flying Hunter-Killers in The Terminator. Another hint at Journey to Silius' previous incarnation is that the final boss greatly resembles the T-100 Endoskeleton from the first film. 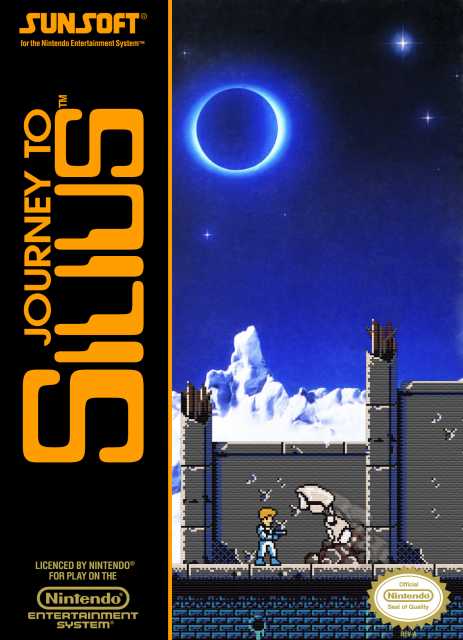