XS: The game that stalks back. A sci-fi arena-combat first person shooter for the PC.

XS is a first-person shooter released for the PC by GT Interactive software in 1997.  It can be run on DOS, Windows 3.1, or Windows 95.  XS features gameplay similar to that of the more well known Unreal Tournament, though it was released two years earlier.  XS has no story to speak of, and the single player campaign, called "Competition Mode", consists of a ladder of 20 arenas that are functionally the same as the multiplayer game.  XS boasts that the AI for each computer controlled combatant is unique, challenging the player to learn the tendencies of each and find the most effective ways to best them.  Players have the opportunity to face off against each individual AI combatant in a one-on-one Grudge Match once they have beaten the enemy in Competition Mode.  XS also features IPX network play for matches with up to 8 participants.

Competition Mode
The main single-player portion of XS.  Players must battle their way through 20 arenas with 3 opponents per arena.  Shield and Medical damage is repaired after each arena, and ammunition is partially restocked.  Special weapons and objects retained from one arena are carried over to the next.  Points are awarded both for killing and for damage.  All shield fighters have a ranking, and you get more points for eliminating those with a higher rank.  Additionally, points are awarded for destroying gun turrets, drones, etc.

Grudge Mode
An extension of the single player game.  Grudge Mode allows players to pit their wits against specific opponents in one arena.  Only previously defeated opponents can be selected and only previous arenas can be used.  Grudge Mode is unlocked only after beating at least one opponent in Competition Mode.

Network Game
The multiplayer component of XS allows up to 8 players to compete across an IPX network.  However, only 4 of these players may be human; any additional players must be controlled by the computer.  In any one of the 20 arenas, players can choose who they want to be from a range of shield fighters.  When killed during combat, players are quickly reincarnated and returned to a random position within the arena. 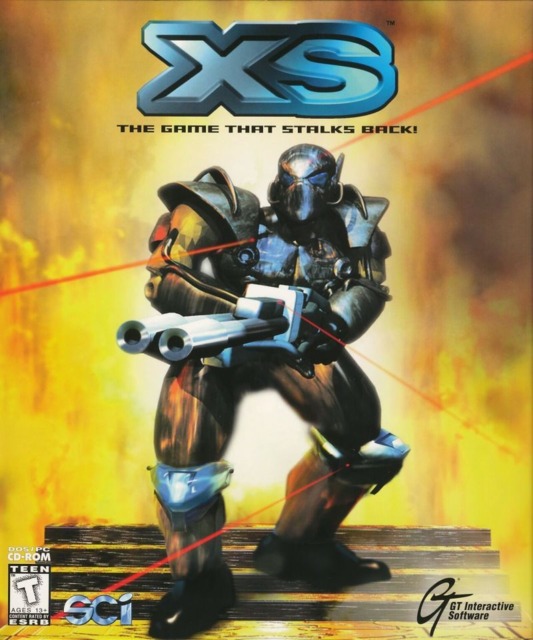