Phalanx is a side-scrolling shoot-'em-up originally developed and published by ZOOM in 1991 for Japanese-only Sharp X68000 home computers. As with most entries in the shooter genre, the story is minimal: players pilot a lone space-faring fighter craft, the eponymous A-144/R "Phalanx," in a one-man assault against a mysterious fleet of alien "bio-ships" that have attacked a human colony on planet Delia IV. Along with a unique power-up system, the game also incorporates adjustable ship speeds and a health meter for the player's ship, both of which were uncommon features among shooters at the time.

Phalanx was later ported to the Super Famicom and SNES by Kemco in 1992 for the game's first North American and European releases. The SNES version removed most of the anime-style cutscenes present in the X68000 version and featured new music. The SNES release of Phalanx in North America is notable for its unusual box art depicting an elderly banjo player and a distant spaceship streaking across the background, a scene that is never referenced in the game itself. A Game Boy Advance version was ported in 2001, and a downloadable remake of Phalanx based on the original X68000 version was published on the Japanese Wii Shop in 2009.

Phalanx is a side-scrolling space shooter in the vein of Gradius or R-Type. The game features three selectable difficulty levels by default, and a fourth expert level of difficulty called "Funny" can be accessed by entering a cheat code at the title screen. The player's "Phalanx" fighter craft has the ability to adjust between three different movement speeds, allowing for greater flexibility while evading threats. Unlike most shoot-'em-ups, the player's ship can take up to three hits in the original version of the game before losing a life, and ship health can be replenished by obtaining certain power-ups. Phalanx is also equipped with three weapon slots for upgradable primary weapon power-ups that can be swapped between on-the-fly. If the player obtains a fourth weapon power-up, the weapon in the left slot will be discarded to accommodate the new item. Primary weapon power-ups can be consumed at any time to activate a powerful special attack, and each primary weapon features its own unique special attack. A handful of secondary missile power-ups are fired alongside the ship's primary weapon and do not occupy a weapon slot.

Certain gameplay features were altered between Phalanx's releases across different platforms. Secondary missiles have a limited ammo supply in the original X68000 release, whereas all subsequent ports of the game feature unlimited missiles. In order to further reduce the difficulty of the GBA version, the player ship's health was increased to four units instead of three. The ship also features an additional weapons slot on GBA, granting players a total of four weapon slots. 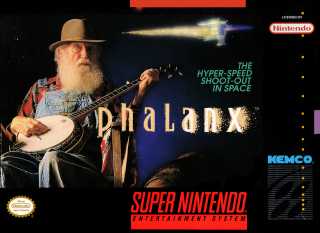