Players enter into the world of dreams in this game aimed at young children.

A 3D platformer that primarily takes place within the world of the protagonists' dreams. The game was released in 1999 as a PlayStation exclusive; a Nintendo 64 version was in development, but was cancelled due to poor reception of the PlayStation release. In 2018, a Kickstarter campaign was launched by publisher Piko Interactive, hoping to release the game's Nintendo 64 and a PC port. The campaign saw success, seeing the game release via Steam on October 22, 2018, with Nintendo 64 cartridges of the game releasing to backers on April 15, 2019.

In 40 winks players control either Ruff or Tumble, siblings who think bedtime is boring and are thrilled by action. Their mother tells them a story about Winks and explains that they are creatures that sleep all day and come out at night and provide dreams to people everywhere. As the title implies, there are 40 in the game and players must venture through various levels to rescue them all whilst fighting bosses and other fantasy creatures along the way. Players must search for these creatures because an evil character, named Nitekap, had difficulty sleeping and wanted to turn them into hood-winks. Hood-Winks are different to Winks as they are responsible for nightmares. Only 40 winks remain in the World of Dreams and Ruff and Tumble need to find them before they are turned into nightmare-bearing Hood-Winks.

Ruff is the main hero character of this game and is brother to Tumble.

Tumble is Ruff's sister and the female protagonist.

Wakey Wakey is Ruff and Tumble's clock which guides players through the World of Dreams to rescue the last 40 Winks.

The game's antagonist; envious of everyone else's ability to sleep, he decides to try and take it from them by transforming the Winks. He has his loyal sidekick, Threadbear, who he sends to do his dirty work.

Threadbear is a cute but evil teddy bear character sent by Nitekap to kidnap the winks and prevent Ruff and Tumble from rescuing them.

All levels in the game are accessed from Ruff and Tumble's house, which acts as a hub area. In the levels, players face many monsters; such as witches, zombies, and spiders. After collecting certain amounts of winks, various doors will unlock within the house. Both Ruff and Tumble can transform into various characters from set locations for a small periods of time. These characters include: a caveperson, a jester, a fairy, a ninja, and a robot. 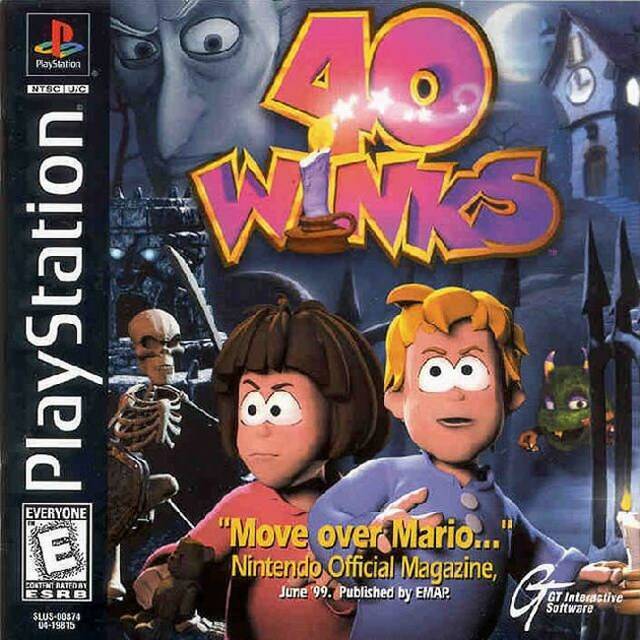