Thunder Force V was released in 1997 on the Sega Saturn. There were two editions of the Saturn version, the regular version and the "Special Version", which included a soundtrack CD with remixes of various tunes from the Thunder Force series.

A year later, Working Designs ported the game to the Sony PlayStation as "Thunder Force V: Perfect System". The Playstation port added true transparencies to some effects which were missing in the Saturn version, and included some FMV cutscenes and extras not found in the Saturn version, but is generally considered to be the inferior version due to missing stage effects (most notably in Stage 3) and lower-quality music. 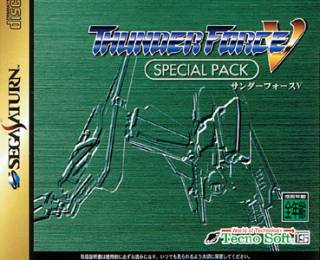