One of PC gaming's most proficient multiplayer-focused first-person shooters gets completely revamped, adding a new lineup of weapons, characters, game modes, and arenas. Along with more-detailed graphics, this installment adds two new gameplay mechanics: double jumping and the "Adrenaline" system.

Unreal Tournament 2003 is a multiplayer-focused sci-fi fantasy first-person shooter developed by both Epic Games and Digital Extremes and published by Infogrames for the PC on October 1, 2002.

It is the sequel to the 1999 game Unreal Tournament, bringing the fast-paced arena-based gameplay to Epic's Unreal Engine 2 game engine. Along with new gameplay mechanics (such as double-jumping and the ability-based "Adrenaline" system), the game features a new assortment of weapons, levels, characters, and game modes. Along with free bonus packs, the game was later superseded by Unreal Tournament 2004, which added numerous content (including vehicle-based combat).

The game also features an new single-player campaign, where players draft teammates from a roster of free agents (each with their own unique set of statistics). Set in the year 2302, the game takes place eight years after the events of the original Unreal Tournament (where Malcolm defeats Xan Kriegor in the 4th Liandri Grand Tournament). Over the years, the tournament begins to act like a traditional sport (rather than a glorified underground fighting circuit), with new combatants entering the tournament (including mercenaries, robots, gene-boosted Juggernauts, the Egyptian-themed human Anubans, a collection of sadistic humanoids, and the alien specie Gen Mo' Kai). With Malcolm's team on a hot streak, is this the year he will be dethroned?

The game was also released for the Xbox on September 24, 2002 as Unreal Championship. Developed in conjunction with the PC version, the Xbox version is one of the flagship titles for the launch of the Xbox Live online service. It also features split-screen multiplayer (for up to four players) and character-based stats (where characters of different species get different benefits).

One new main feature for the game is its "Adrenaline" system, where players can fill up a special numeric gauge (from 0 to 100) by collecting special Adrenaline pickups (shaped like a large pill) and killing opponents. Once players filled up their Adrenaline gauge, they can perform one of the following "Adrenaline Combos", by moving in a certain combination at a rapid pace, to gain a temporary advantage:

By default, the game includes five different game modes (with Domination, Last Man Standing and Assault modes from the original Unreal Tournament removed). Unlike the previous game, teams are restricted to two color-coded teams (Red and Blue) without special mods.

The Xbox version of the game also includes one additional game mode:

The base game includes 12 weapons (one of which, the Translocator, is used more for utility), each of which has two firing modes (Primary Fire and Secondary Fire). Some weapons from the original Unreal Tournament return with new appearances and revamped functionality. Weapons from the Xbox version of the game have different appearances.

Additional weapons can be included using mods and mutators.

The standard melee weapon for all combatants (and the replacement for the Impact Hammer from the original Unreal Tournament), the DD280 Riot Control Device combines lethal piston power with a unique rechargeable plasma barrier that can reflect enemy projectiles and energy beams. Unless certain mutators are activated, all players start with this weapon.

The standard weapon for all combatants (and the replacement for the Enforcer from the original Unreal Tournament), the AR770 combines fully-automatic firepower with an underbarreled M355 grenade launcher. Unless certain mutators are activated, all players start with this weapon equipped.

Returning from the original Unreal Tournament, the GES BioRifle launches globs of toxic Tarydium waste that stick onto surfaces.

While these globs are deadly on direct impact, they also explode shortly after being adhered to surfaces (dealing damage to enemies near it). Players can also expand these globs by firing additional sludge at them.

Returning from the original Unreal Tournament, the ASMD Shock Rifle is a multi-purpose energy rifle. Along with an accurate burst of energy, it can also fire a large slow-moving projectile.

As a more-advanced technique, players can shoot the Secondary Fire energy projectiles with the Primary Fire energy blast to cause the unstable projectile to explode, dealing its direct-impact damage to all enemies in its blast radius.

Replacing the Pulse Gun from the original Unreal Tournament, the Advanced Plasma Rifle v23 is a multi-purpose plasma rifle. Along with its ability to fire a barrage of plasma projectiles in a very fast rate, users can also emit a constant stream of plasma energy (which can be "linked" with other teammates to deliver a more powerful attack).

Returning from the original Unreal Tournament, the T23-A 23mm rotary cannon sprays bullets in two firing modes: fast (for a higher rate-of-fire) and slow (for better accuracy and damage). Their ammunition pool is shard with the Assault Rifle.

Returning from the original Unreal Tournament, the Flechette Cannon (better known as the Flak Cannon) is a handheld cannon that serves as both the game's shotgun (as it launches flechettes at a wide spread) and grenade launcher (as it can also launch a powerful impact grenade projectile).

Replacing the Rocket Launcher from the original Unreal Tournament, the Tri-barrel Rocket Launcher is a multi-barrel launcher that fires rocket-propelled grenades. While each rocket can be fired consecutively, users can load additional rockets for a three-warhead volley.

Additionally, players can fire homing rockets by keeping their weapon pointed at an opponent, until their cursor is changed, before launching rockets.

Replacing the Sniper Rifle from the original Unreal Tournament, the Lightning Gun is a high-power marksman energy rifle that launches an instant-hit lightning bolt with pinpoint accuracy. It also provides a unique multi-level zoomable scope and deals double damage on headshots.

Returning from the original Unreal Tournament, the Redeemer is a rare handheld single-shot thermonuclear launcher that fires a large slow-moving missile. When the missile strikes a solid surface (or other object), it sends out a gigantic shockwave that instantly pulverizes every enemy in its colossal blast radius. Along with standard fire, players can guide the missile's path using an on-board camera (where it can be detonated mid-air).

Missiles launched by this weapon can be shot at by enemy gunfire, causing it to prematurely explode like a standard Rocket Launcher rocket without triggering its payload.

Also known as the T.A.G. Rifle in the Xbox version, the Ion Painter is a very rare weapon that is only used on maps with the VAPOR Ion Cannon satellite overhead. While it emits low-powered laser beam that seems harmless at first, locking it down on a particular spot (visible to the satellite) marks the location for a destructive Ion Cannon blast (that pulverizes enemy enemy in its collossal shockwave).

(No Weapon Slot, uses its own Translocator Key with the default as "Q")

Returning from the original Unreal Tournament, the Translocator is a handheld personal teleportation device consisting of a source module (which the user holds) and a destination module (a disc which is launched from the source module). It is a multi-purpose device, allowing players to escape from danger, reach areas impossible by other means, and navigate through difficult areas easier. All players start with this weapon if it is enabled for the match.

While it's used as a utility device, it can also serve as a weapon by telefragging enemies (instantly killing them if done successfully). This is done by having an opponent directly on the location of the Destination Module and then teleporting them.

In addition, the Destination Module has a built-in free-looking camera that can be accessed by pressing the Translocator Key while the Translocator is equipped. Along with surveillance, it can also be used to determine if it was destroyed by an enemy player.

In the Xbox version, the Mercenaries have no strengths or weaknesses.

In the Xbox version, the Anubans sacrifice some vitality for faster movement speeds and stronger jumping power, and gain additional adrenaline points for pills and kills.

In the Xbox version, the Juggernauts have the strongest vitality in the game (making up for their slow movement speed and weak jumping power).

In the Xbox version, the Automatons have the strongest jumping power (although their horizontal air control is limited) in the game.

In the Xbox version, the Gen Mo'Kai have the fastest ground movement speed in the game (making up for their weak vitality).

In the Xbox version, the Nightmare are high-risk high-reward characters with slow movement speed, weak jumping power, and the weakest vitality in the game. To compensate for their drawbacks, they gain 50% of all damage they deal as health (which can also allow them to overheal for double their maximum health).

Added in a later patch, UT Classic is a mutator that modifies the weaponry to "feel" more like the original Unreal Tournament's weapons: 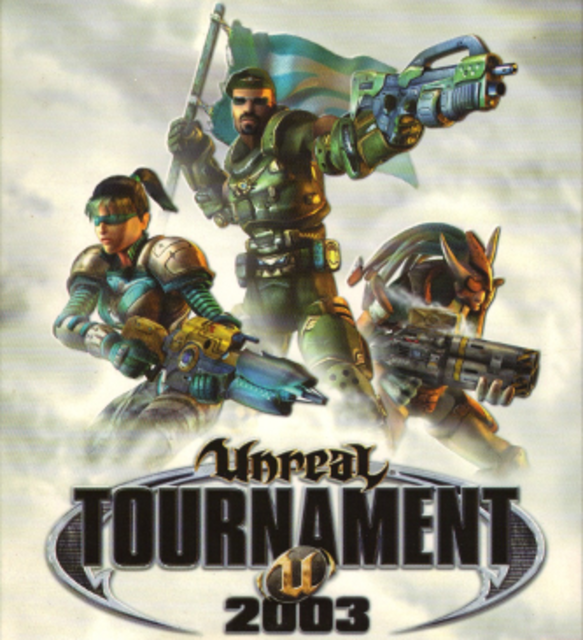