The Operative: No One Lives Forever

The Operative: No One Lives Forever (or NOLF) is a first-person shooter developed by Monolith Productions and originally published by Fox Interactive exclusively for Windows PCs on November 9, 2000. Set in the late 1960s during the height of the Cold War, the game's single-player campaign follows the exploits of secret agent Cate Archer as she travels the globe to investigate the international terrorist group known as H.A.R.M. and thwart their plans for world domination. The game's setting and aesthetics are heavily inspired by various films and television shows in the spy fiction genre, such as the James Bond and Austin Powers franchises. In keeping with this genre's established conventions, NOLF's campaign features a variety of exotic locales including Morocco, the Alps, East Berlin and a space station.

In September 1967, seven undercover operatives working for the British-based intelligence organization UNITY are all killed over the course of ten days while on separate assignments in different countries across the world. Each agent is dispatched by a single mysterious assassin, who always leaves a red lily at the scene.

Meanwhile, a lunch date between junior UNITY agent Cate Archer and her mentor Bruno Lawrie in England is interrupted when they are both summoned to meet with UNITY Director Mr. Jones and Mission Coordinator Mr. Smith. Jones is generally friendly, but the acerbic Smith reprimands Bruno for his refusal to take an administrative position within UNITY and voices his misgivings about Cate as the organization's first and only female operative. During his briefing on the assassinations of half of their total number of active agents, Jones posits that there must be traitor within UNITY. Archer and Lawrie both immediately recognize the red lily, or "Regal Finale," as the calling card of Dmitrij Volkov. Archer recounts Volkov's background as a former member of the the Soviet Union's UKVD secret police and SMERSH counter-intelligence agency, as well as his infamy as an expert torturer and assassin. According to his file, Volkov now serves as "Director of Executive Action" for an up-and-coming terrorist organization calling itself H.A.R.M.

Due to UNITY's current manpower shortage, Smith has no choice but to send Archer and Lawrie to Morocco in order to foil an assassination attempt by H.A.R.M. agents against American ambassador Morris Monroe while he vacations in Marrakesh. Unfortunately, Archer and Lawrie fail to prevent Monroe's death, and Bruno is killed by Volkov while protecting Cate. Agent Archer escapes Morocco by boat, swearing revenge against Volkov.

After her disastrous first mission, Cate returns to UNITY headquarters for a morose debriefing in the wake of Bruno's tragic death. Smith speculates Lawrie himself was the traitor, much to Archer's disbelief. With little time to mourn her fallen mentor, Cate is given her next mission to aid the defection of Dr. Otto Schenker, a German scientist in East Berlin. Despite the doctor being under heavy guard, Agent Archer is successful in spiriting Schenker out of East Germany.

During their flight back to London, Cate deftly coaxes Schenker into revealing that he was the head of a top-secret Soviet "biological explosives" research team. Schenker's team developed a reagent that, when injected into a living host, causes a chemical reaction inside the body that culminates in a massive explosion. If the reagent is administered to a person, it essentially creates a human bomb that can even be configured with a precisely timed fuse. Additionally, because the reaction feeds off of any nearby organic matter, the strength of the explosion increases proportionally based on the population density at ground zero. Therefore it would be far more catastrophic if the host exploded inside a dense urban area.

Archer and Schenker's conversation is interrupted when their airliner is boarded mid-flight by H.A.R.M. agents. Archer fights her way to the cockpit but is knocked unconscious by high-ranking H.A.R.M. henchman Magnus Armstrong, who orders his men to abduct Schenker and leave Cate for dead aboard the disabled airliner. After being blown out of the exploding plane, Archer continues to fight off attacking henchmen in free-fall and manages to steal one of their parachutes, allowing her to float back down to earth safely.

Back at headquarters, Smith berates Archer for another botched mission, restating his opinions on a woman's unfitness for wetwork. Regardless, Archer is dispatched to the German city of Hamburg in order to rendezvous with an agent from UNITY's American branch named Tom Goodman who claims to have a possible lead on the kidnapped Dr. Schenker's whereabouts. Archer makes contact with Goodman at a nightclub owned by Inge Wagner, another high-ranking H.A.R.M. agent with delusions of being a gifted opera singer in spite of her ear-splitting vocalizations.

Cate Archer is the epitome of what every woman in the 60’s would like to be; she is extremely competent, intelligent and goddamn attractive. Cate was born in Scotland in late March 1942; her mother never really recovered from labor and passed away three weeks later. Cate's father gradually fell into drunkenness and started losing his health until the day he put a pistol to his head and pulled the trigger, in 1954. From then on, Cate went from an orphanage to various foster homes, but her strong personality made it that she would never last anywhere for long. Eventually she turned to thievery, mainly to be able to provide for herself but also because she was just really good at it. In 1958 her life took an unexpected turn, however, as she attempted to steal from Bruno Lawrie. What she didn't know was that Lawrie was a UNITY agent and that the watch she had stolen had a built-in tracking device. When she got home, he was waiting for her. Luckily for Cate, he admired her talent and fearlessness and decided to give her an opportunity. Nine years passed and she is now a covert operative for UNITY awaiting for her first real assignment.

Once a British super-spy, Bruno Lawrie’s reckless lifestyle and passing of time took their toll. After having found Cate, however, he began teaching her the tricks of the trade, and found himself a form of redemption. Cate regards Bruno as her mentor and perhaps even as a substitute father figure.

Tom Goodman is a good-natured American agent. He's been in the employ of UNITY for over 10 years.

Born in Glasgow, Scotland in 1925, Magnus Armstrong is a Scottish Demolition Expert with a knack for fist fighting. He was expelled from several schools until the day his parents finally sent him to a military academy. After having served in the War, Armstrong eventually got himself in H.A.R.M.'s way.

Smith and Jones run the operations of UNITY. They oversee the whole organization and delegate assignments to field operatives. They were once field operatives as well and are therefore very experienced in all spy-related activities. Smith is the typical gentleman who expects nothing but perfection from himself as well as his agents--he sees any type of mistake as being a complete failure. Jones is more flexible--he also doesn’t take failure lightly but is a bit more understanding to his agents.

Inge Wagner is a German nightclub proprietor living in Bremen. She is very distantly related to Richard Wagner and was highly pressured as a child to become an opera singer. Unfortunately for her, she was just plain and simply terrible. Nonetheless, her parents’ obsession with having her daughter becoming a world-class opera singer made them encourage her so eagerly that all that ridiculous adulation eventually made her into a self-centered, neurotic diva. It is rumored that she eventually turned into crime in order to make money to compensate for the complete absence of work offers in the opera-singing department.

Dimitrij Volkov was born in Kamchatka in 1921 and by the age of eight he had already distinguished himself as an academic prodigy and master chess player. On the downside, he also gained some notoriety for having developed a couple of torture techniques on his neighbors' pets. As he grew older, this darker side of his personality took over and he deliberately chose to pursue a criminal lifestyle solely because he found it to be interesting--that and he could do whatever experiments he wanted on pretty much anyone he wanted. During a previous encounter, Agent Lawrie shot Volkov in the left eye at close range, giving him his distinctive eyepatch. Recent reports link Volkov to an organization calling itself H.A.R.M.

Being a spy, Cate is armed with numerous gadgets disguised as everyday objects. These gadgets include a belt buckle zipcord, a barrette which serves as a lock pick and a poisoned blade for stealth kills, a cigarette lighter which also works as a welder, lipstick-shaped grenades, perfume dispensers which emit an array of gases, a briefcase missile launcher, and sunglasses which can be used as a camera, infrared vision, and mine detector. Other gadgets include body removing powder, a code breaker, security camera disabler, and a robotic poodle.

Continuing with the spy theme, Cate is encouraged to discover as much as she can about H.A.R.M. and its goals. Scattered throughout the game world are hundreds of intelligence items which give interesting and often humorous clues and insight into the world of terrorist organizations, the people working for them, and details about their operations. Intelligence items come in several forms: letters, notes, brief cases, dossiers, folders, files, envelopes, blueprints, shipping manifests, Captain's logs, packages, ledgers, passenger rosters, security passes, film canisters, photographs (which can be collected or taken with the sunglasses), and film reels. Intelligence items can also be gathered through conversations/interrogations with people as well as eavesdropping on other conversations. Gathering intelligence is rewarded with bonuses. Bonuses include health, armor, ammo capacity, damage, accuracy, and reputation.

Another spy-related theme is stealth. Cate is encouraged to be as stealthy as possible throughout the game although in most missions brute force is also an option. Sound plays a key role in being stealthy. Enemies are able to hear and find Cate if she is walking or running on hard substances. Crouching and/or walking on softer ground enables Cate to move undetected. The game's soundtrack works to let you know whether or not guards are aware of your presence. Slower, relaxed music means she is safe whereas faster, ominous music means she's been detected. Being stealthy has definite advantages. In addition to being able to deal with enemies quickly (and non-lethally, if desired), Cate is able to listen in on the conversations of her enemies. NPC conversations are one of the highlights of the game. Enemy henchmen will discuss the tedium of their lives, cars, philosophy, TV shows, etc. At the end of each level, Cate's performance is scored and ranked, with a large portion of the score coming from how stealthy she was.

These are not exactly the kind of gadgets James Bond would use, but they're equally effective.

The Operative: No One Lives Forever was critically acclaimed by numerous journalists throughout the industry. It won several game of the year awards. It was especially credited for having a motion p icture worthy plot and excellent writing. It currently sits at 89% on GameRankings.

The game's success prompted Fox Interactive to release a special Game of the Year edition. It contained a bonus level after the game's normal ending. As well as extra multiplayer maps.

The original score for the in-game music was composed by Guy Whitmore. However, the released soundtrack for the game featured solely original tracks based on the game's 1960's groovy spy theme. While some of the song titles use characters and settings from the game, it is worth noting that none of the songs can actually be found in the game. The title for the released CD goes by the name of "In the Lounge".

Tracks one through nine were written and composed by Becky Kneubuhl and were mixed and recorded by Gabriel Rutman at Asylum Studios. 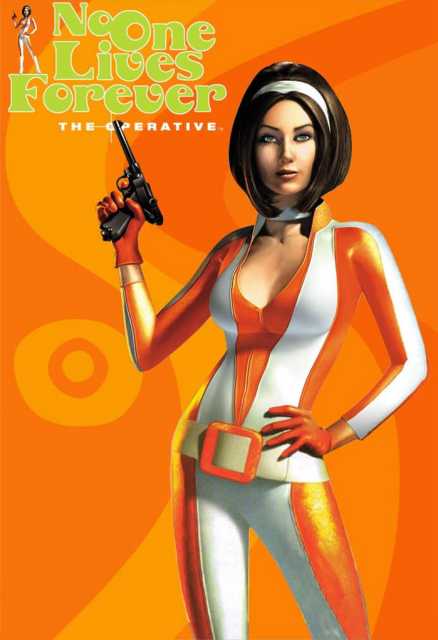