A remake of the first Prince of Persia, the player controls the Prince as he attempts to save the Princess from the evil Vizier Jaffar.
Xbox 360 Games Store PlayStation Network (PS3)

Prince of Persia Classic is a remake of the very first Prince of Persia game, which was released in 1989 and created by Jordan Mechner for the Apple II. It was released June 13, 2007 to the Xbox Live Arcade service for 800 Microsoft Points (10$) and PlayStation Network on October 23rd 2008 for £7.99. The layout of the levels are the same as the original, but the graphics and gameplay have been updated.

The Princess has been captured by the wicked Grand Vizier Jaffar (not to be confused with Disney's Grand Vizier Jafar). Jaffar gives the Princess an ultimatum; marry him or die, and gives her sixty minutes to decide. The player, as the Prince, must escape his imprisonment and navigate the trapped corridors in his path within the time limit in order to rescue her.

The player controls the Prince as he ventures through 14 levels to save the Princess from Jaffar. The game is 2D and features loads of traps, jumps and enemies to overcome. Suitably, the Prince can jump, roll, fight and do whatever he needs to get past each screen. The Prince faces many enemies throughout the game, forcing him to equip his blade and fight. The player has a health-meter, but can use potions to refill it. Unlike the original, there are checkpoints throughout each level, making the game more forgiving than its nearly impossible ancestor. Another addition that makes the game more forgiving is the inclusion of a helpful sprite that leads the way.

The Prince will team up with the Dark Prince, a variation of himself who was strictly murderous in the original game.

A countdown is activated throughout the game, counting down to the 60 minute deadline set by Jaffar. The player does not fail when the countdown is complete, but completing the game before the deadline grants an extra cutscene.

The game sports a Survival Mode, where the player has one life and no resets. Losing a life means resetting the entire game.

The PS3 version of the game removes the ambient lighting seen on the 360 version. 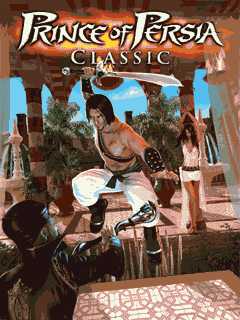