Kameo: Elements of Power is a third person platformer that tells the story a young elf Kameo, who must regain her Elemental Powers, defeat her corrupted sister Kalus and her accomplice evil Troll King Thorn.
Xbox 360 Xbox 360 Games Store

Kameo: Elements of Power is an action-adventure game and a launch title for the Xbox 360. The game was developed by Rare and published by Microsoft Studios. A sequel was also originally planned for the game but was eventually revealed as being cancelled in November 2009.

Kameo: Elements of Power puts you in the skirt of a youngest of the Elfin family, Kameo. As the daughter of King Solon and Queen Theena, the right to command Elemental Warriors will eventually be passed on to Kameo or her older sister, Kalus. Kalus had always been spiteful and self-centered person, and when Theena decides to pass the Element of Power to Kameo, Kalus reaches her tipping point. As a revenge she frees Thorn, the evil Troll King, once imprisoned by King Solon with the help of the Elemental Warriors. Thorn quickly masses his army and begins an assault on the Elfin lands with machinery unlike anyone had seen. Kameo's ancestors are captured, and when Kameo rushes to help them, she is beaten and loses all 3 of her Warriors.

The mysterious Mystic manages to revive Kameo, and after convincing wizard Ortho that she is the right person to hold the repaired Wotnot Book, Kameo is almost ready for her journey. Ortho explains that when an Elemental Warriors are separated from the Wotnot Book, they turn into a weak and helpless Elemental Spirits. Thorn's minions didn't waste any time, and Shadow Trolls have captured many of the Elemental Spirits, and hold them hostage in the Shadow Realm, where their power is at its strongest. To gain the Warriors' power once more, Kameo has to travel around the Elfin lands to find the portals to Shadow Realm and free the vulnerable Elemental Spirits.

The development of Kameo was a long and troublesome one. Kameo was originally developed for the Nintendo GameCube, along with other games made by Rare including Donkey Kong Racing and Star Fox Adventures. When Microsoft purchased Rare in 2002, Kameo's development was halted for a short time. It was then decided that Rare would make the game for the original Xbox, but after several problems happened in the development, Rare finally decided to change Kameo to an Xbox 360 game. Rare finally released Kameo: Elements of Power as a launch game for the Xbox 360 on November 7, 2005.

The following pieces of downloadable content have been made available:

Kameo: Elements of Power requires 5.9GB of space to be installed on an Xbox 360 HDD.

Kameo: Elements of Power's soundtrack was composed by Steve Burke and scored with Prague Philharmonic Orchestra. It was well received for its movie-like production that complemented the games' medieval fantasy settings and epic battles. It released November 8, 2005 and is also available for download on iTunes and Amazon's MP3 store. 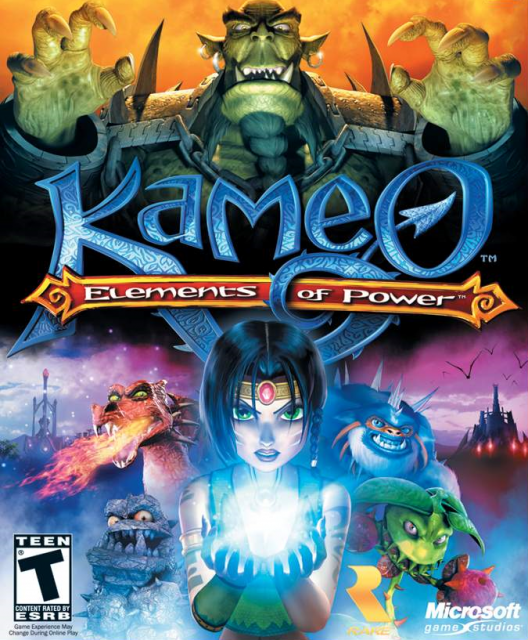