Pandemonium 2 is a 2.5D platformer for the PlayStation and PC. It was developed by Crystal Dynamics and published by Midway.

Set years after the original Pandemonium, Nikki is now a trainee sorceress on her way to become "Sorceress Supreme". Fargus has been altered by laboratory experiments. In Nikki's words, he has become "a freak, but in a good way. He's proud of his violent, maniacal side. He can't even tie his shoes, but he can build a thermonuclear bomb from common household items, and set a fortress on fire before you can say Werner Von Braun. He may be an idiot savant, but he's got great hair."

It is the year of the cheese, and all is not well in the world of Lyr. As was foretold in ancient texts, a comet, known as "The Comet of Infinite Possibilities" is passing over the skies above the world. It is said to contain much magical elements. Nikki dislikes studying magical texts, and decides to attempt to use the magical properties of the comet to advance her magical abilities. Unfortunately she is not the only person out to use the comet's powers for personal gain. The Goon Queen Zorrscha also plans to use use the comet's powers, but for evil. Nikki and Fargus must traverse the world to prevent Zorrscha's evil plans from becoming a reality.

Unlike the original, when there was only one ending, Pandemonium 2 has two endings, depending on which character the player completes the game with. If the game is completed with Nikki she gains ultimate power over the universe, and is seen spinning galaxies and turning into a comet. If the game is completed with Fargus, he creates a new universe, in which everything resembles himself, Flowers, Tree's, everything looks like Fargus.

The gameplay is much similar to the original Pandemonium. It is 2.5D, meaning that while the game features 3D graphics, all gameplay happens on a 2D plane. Players can select to either play as Fargus or Nikki at the beginning of the level. The player must traverse from one end of the level to the other, avoiding enemies and obstacles, while collecting treasure. Collecting 500 pieces of treasure will grant the player an extra life. Also, collection 80% of the treasure on an individual level will unlock a bonus speed run level, in which players must race from a vortex to the end of the level, collecting as much treasure as possible along the way. Reaching the end grants the player a large amount of treasure, usually enough to gain multiple lives.

There are also several vehicles/machines which players can control at certain points of the game. These include tanks, trains, jet boots and more. 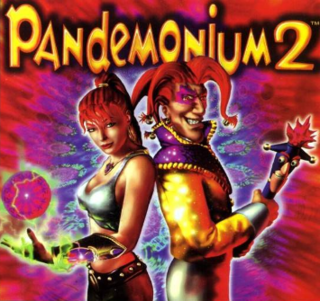