Pac-Man Championship Edition is a maze game developed and published digitally by Namco Bandai for the Xbox 360 on June 6, 2007.

Based on the 1980 arcade game Pac-Man, Championship Edition expands on the original's core concepts while changing it from its traditional round-based system to a faster-paced time-limited "score attack" system. Developed for wide-screen high-definition resolutions, the game features a new modernized presentation that remix both the pixel art graphics and chiptune audio of the original, as well as a dynamic wide-screen maze (where each "half" changes to a new layout as the player progresses). The game was designed by Tōru Iwatani, the original creator of Pac-Man, and was his final title before retiring from his 30-year run with the company.

The game was included in two downloadable-to-retail compilation discs on the Xbox 360: Xbox LIVE Arcade Compilation Disc and Namco Museum: Virtual Arcade. It was later released for iOS devices (on December 10, 2009), for Android devices (in late 2010), and for both the PlayStation 3 and PlayStation Portable (as a PS mini title) on December 1, 2010 (in Europe) and February 1, 2011 (in North America). It was also included as part of the Nintendo 3DS compilation Pac-Man & Galaga Dimensions and multi-console compilation Pac-Man Museum.

Along with a player-vs-player spin-off for arcades in 2011 (Pac-Man Battle Royale), the game received two sequels: Pac-Man Championship Edition DX in 2010 and Pac-Man Championship Edition 2 in 2016. Both sequels add customizable video and audio styles and further changes the game's formula, adding new gameplay mechanics such as ghost "trains" and emergency-use "bombs".

Pac-Man Championship Edition follows the basic gameplay template established in the original 1980 arcade game: players control the eponymous Pac-Man as he moves through a single-screen maze in order to eat all of the small yellow "Pac-Dots" scattered around the maze. Pac-Man must avoid coming into contact with the four multicolored enemy ghosts that also roam the maze (Blinky, Pinky, Inky and Clyde), each with their own unique AI; touching any of these enemies costs Pac-Man a life. However, Pac-Man can also eat special Power Pellets that sometimes appear among standard dots, which render ghosts temporarily edible by Pac-Man. Eating a ghost grants a score bonus that increases for each successive ghost eaten while the Power Pellet remains in effect. After being eaten, the ghosts' harmless disembodied eyes eventually return to the rectangular "ghost hideout" in the center of the maze, where they respawn as active enemies before resuming their pursuit of Pac-Man.

Championship Edition builds on this existing gameplay formula by introducing a widescreen format better suited to modern HD televisions, as opposed to the vertically oriented maze of the arcade original. The maze itself is split vertically into two halves; collecting all of the dots in one half of the maze triggers the appearance of a bonus item (initially fruit) in the opposite half and adjacent to the ghost hideout. Eating the item reveals a new dot pattern in the first half of the maze while also altering that side's basic layout, keeping Championship Edition's mazes dynamic and constantly changing. Despite the shifting layout, there are always at least three sets of "escape tunnels" (one horizontal pair and two vertical pairs) that each connect two opposite edges of a maze together, providing Pac-Man with shortcuts to the other side of the maze.

The point-scoring system has also been updated in Championship Edition. Extra lives are awarded every 20,000 points. Pac-Man can extend his active bonus multiplier for eating vulnerable ghosts in succession by consuming another Power Pellet before the effect of the previous Power Pellet expires. Additionally, the score bonus for ghosts can be increased to a maximum of 3,200 points per ghost by eating eight or more in a row. Pac-Dots and Power Pellets are also subject to a multiplier, starting at 10 points per dot and increasing by multiples of ten up to a maximum of 50 points. The dot multiplier is reset when Pac-Man loses a life.

As players earn more points, the speed of gameplay gradually increases. After losing a life, the game speed becomes somewhat slower and Pac-Man respawns at the same position in the maze where he died, as opposed to his initial starting point just below the ghost hideout.

The game is over once the player has lost all of their lives or the game timer reaches zero. A histogram of the player's score is displayed afterwards and provides a breakdown of points earned by eating dots, items and ghosts. High scores for each game mode are automatically submitted to the game's online leaderboards, and the player is given the option of watching a replay of their previous session. As with all Xbox Live Arcade releases, Championship Edition also features support for Achievements.

The game includes six different mazes, or "modes", each with their own unique maze layouts and rules: 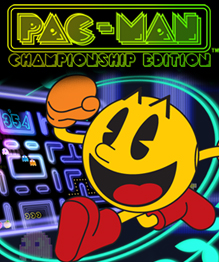