Frontlines is a multiplayer-focused first person shooter with a strong political message from Kaos Studios. Kaos was previously responsible for Desert Combat, a popular mod for Battlefield 1942. The game is set in a global economic crisis in which oil is running out.
Xbox 360 Xbox 360 Games Store

Frontlines: Fuel of War takes place in 2024, in a post-'Peak Oil' world with two global superpowers, the Western Coalition (the U.S.A. and the E.U.) and the Red Star Alliance, (Russia and China) battling over the last remaining sources around the Caspian. The lack of oil and failure of alternate sources to provide enough energy has exacerbated other disasters, including blackouts in 2008, avian influenza in 2009, and a global depression in 2012. (This game was made in 2008! Wake up sheeple!)

The lack of oil has no in-game effect (vehicles can't run out, for instance, and maps still contain the expected assortment of explosive containers.)

The campaign is narrated by a journalist embedded with the 'Stray Dogs', a company in the Western Coalition force; during missions the player has control of a series of generic soldiers within the company. The campaign begins with the Stray Dogs flying in for a six-week guard in Turkmenistan at one of the last operating refineries to relieve the previous company, when they are ambushed by Red Star ("Darkness Falls"). After retaking the refinery the action moves to southern Kazakhstan ("Captains of Industry") in one of the Coalition's first offensives, where the Stray Dogs take control of a Red Star tank factory and find blueprints within. The journalist discovers through his sources that China has used the opportunity to invade and take control of Taiwan, and that rioting and starvation has become an enormous problem in the USA. The Stray Dogs continue to try and block Red Star reinforcements by capturing a mountain pass in Tajikistan ("Anvil"), and the Coalition presses the advantage and advances north to the Russian border. At an old USSR space launch facility in north Kazakhstan the company is assisting an armored division when the Red Star attack them with tactical nuclear missiles; although casualties are high, enough Coalition forces survive to capture and destroy several longer-range rockets ("Graveyard"). Amidst Red Star counterattacks throughout Europe, the Coalition receives intelligence of a planned ICBM launch (described as 'thirteen-hundred Hiroshimas') in an underground mountain base, and the Stray Dogs are among those assigned to prevent it ("Mountain King"). Although ultimately successful, their abort codes fail to stop the rocket and the only option is to seal the silo doors, with the ICBM detonating inside and killing many of the Stray Dogs. The Coalition continues to advance and eventually reaches the outskirts of Moscow ("Living Quarter"), and eventually downtown Moscow ("History Repeats"). After taking several Government buildings and defending a square against the Red Star's final push, the remaining Red Star forces retreat. The Stray Dogs celebrate the victory, but the reporter reminds them that China will continue to fight on...

Single-player missions are broken up into several phases as the frontline 'moves', and are effectively multi-player games against (limited respawning) bots with a few scripted events.

Maps revolve around strategic objectives, which provide spawn points, weapons and vehicles; capturing them moves the frontline, and only objectives on the current frontline can be captured at all. The game is broadly similar to Battlefield 2, with a large scale, a range of vehicles and similar gameplay, as well as the Desert Combat mod for Battlefield 1942 (previously created by the developers). In particular, players select a unit class, consisting of:

All unit classes could also choose a role, further specializing their equipment:

The slightly-futuristic setting allows for some weapons that do not currently exist. This includes vehicle-disabling short-range EMP devices, a powerful stationary directed EM weapon, and a range of player-controlled drones - from a rocket-equipped minichopper to a driveable minigun to a tank-disabling explosive 'car'. These have limited range and ammunition and the player can still be injured while controlling them remotely, though the drones themselves are usually well-armored.

Maps often include destructible objects, generally of three types - cosmetic (e.g. damage to an already-inaccessible balcony), explosive (vehicles, barrels, etc) or small cover (concrete barriers, sandbags). Other objects are usually indestructible even if they would be much weaker in the real world, and destruction rarely has major effects like creating or blocking a pathway, reducing the usefulness of the feature. 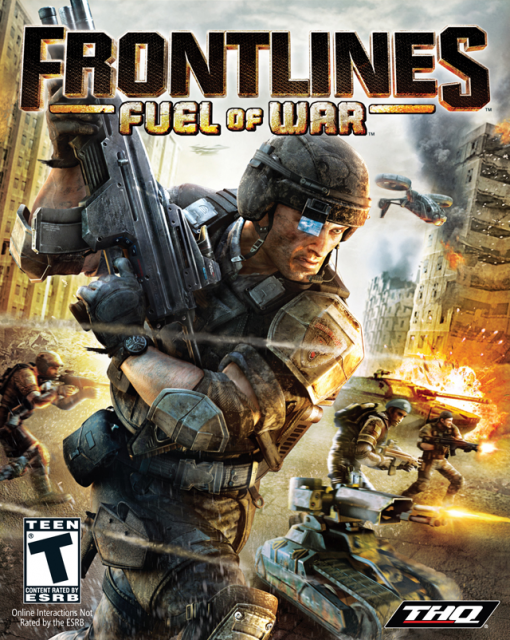