With dozens of parts to choose from, players are able to create their own giant mech. With a built in squad mechanic, Chromehounds' biggest draw was it's persistent online play.
Xbox 360

Chromehounds is an Xbox 360-exclusive game that was developed by From Software. It is set in a universe where wars are fought with large mechs known as HOUNDs. These typically fight in squads consisting of several predetermined roles ensuring that a squad must work together to achieve a common goal, usually capturing communication towers known as COMBAS towers or destroying enemy forces.

The game revolves around a war between three fictional countries with analogues in major superpowers in the world today. The first faction, the Democratic Republic of Tarakiais a collection of multi-ethnic nations that declared independence after the Eastern European War (1981-1992). Since the War of the Black Sea in 1998, the nation has been supported by the U.S. which was interested in expanding their Eurasian diplomacy. Tarakia is more modern and democratic than its neighbors but struggles to find a common consensus within its people. The Tarakia has a large variety of weaponry that has no real strengths or weaknesses. The second faction is the Kingdom of Sal Kar, whose roots go far back as the Ottoman Empire, historically the nation has experienced a great period of hardship which only began to recover when the Middle East was reorganized. The Kingdom of Sal Kar was forced to import its own food and consumer goods due to the nations size and large desert landscape, this all quickly changed when huge underground resources were discovered in their region. Religiously, the Kingdom pledges not to partake in a war, but its military actions contradict this pledge. The third faction is the Republic of Morskoj, a former Soviet state in the Eastern region of Neroimus. The people of Morskoj are independent but suffer suffered great hardships when under U.S.S.R. control, the region is covered with rigid mountainous areas which were one rich with resources, but now Morskoj faces a tense situation with the Great Soviet Socialist Republic, scheming for a reunion. However, Morskoj is on much friendlier terms with the Republic of Russia who oppose the G.S.S.R.

Solidifying SEGA's announcement on August 7th, 2009 - the servers for Chromehounds have been offline since January, 6, 2010. This causes discontent among those who played the game the entire time and how 90% of the game's achievements are now unattainable.

Primarily the fastest, lightest mech type, this mech uses its speed to capture COMBASs that are out of the Network Area range (NA range). This makes the scout a vital member of the squad and allows the other members to communicate with each other. Players will often use the scouts speed to their advantage by attaching “piles” (long spikes that do massive damage) to their mech. Then they get in close before the opposing player has time to react and directly attack the cockpit of the enemy. This tactic can be highly successful if the scout has the element of surprise. This same tactic can be implemented against the enemy base.

This mech is usually slower than the soldier to accommodate its extra close range weapons load out. Where the scout and soldier all attack the enemy, the Defender tends to stay near the base to protect it from assault. This mech will often employ the use of shotguns and missiles to defend the base from its enemies.

The soldier is the main combatant on the battlefield, they are the most balanced of all Role Types effective at all ranges. They balance firepower, speed and armor to ensure their usefulness.

The long range mech; this member picks off the enemy from an extremely long distance. Like real snipers this mech class in Chromehounds requires the player to lead the target and calculate for gravity.

The artillery specialist; this is arguably one of the hardest/slowest classes in the game. These mechs move so slow that they rarely move far from their starting positions. This requires them to be experts in ranging their targets. Most of these players don’t even see the target they are firing at. These mechs take howitzers and long range cannons loaded with shells that utilize wide splash damage.

This class can be one of the most important classes in the game for larger battles. Not only does this class allow the early communication with team mates at the beginning of the match, but it is also the only class that can see the enemy on its map screen. This makes having a commander very useful for teams facing many opponents. Commanders often carry very light armaments to allow them to equip a larger NA maker.

It is also possible to build combinations of the Role Types listed here, these are known as hybrid classes. Mixing different weapon types, chassis and generators can produce many varied and useful classes. Equipping Soldiers or Scouts with sniper rifles can allow them to weaken Defenders at long range and then move in for the kill. All classes are determined by the pieces used to construct the mech.

One of the unique features of Chromehounds is the mech construction. Players can either choose one of the pre-made mechs or chose to build their own from the ground up. Players are expected to build functioning mechs that include generators with enough power, armor and weapons while following a strict parts limit. The parts chosen by the player affect the class of the mech, mechs with sniper rifles will become snipers while smaller, faster mechs will become scouts. Also when parts of the mech are damaged or destroyed this affects the performance of the mech itself. For example, a damaged chassis will be slower and severely damaged weapons can no longer be used. The mechs are built on a modular design that contains several categories of parts, such as:

This is the base of the mech that allows mobility. There are several types of chassis available including treads, wheels, legs and even hovercraft. The choice of chassis affects things like speed, acceleration and armor. Severe damage will cause greatly reduced speed, but they can never be destroyed.

This is where the pilot of the mech is located. If the cockpit is destroyed, the mech is then inoperable and out of combat. The cockpit also contains slots for system parts, called chips. These allow for enhanced acceleration, accuracy and stability for the mech.

This provides power to the mech and functions as the main power source. If it is destroyed in battle, movement will slow to a crawl and support parts will cease to function.

This category includes miscellaneous items that add extra functionality to a mech. This can include thermal vision, flares, and extra armor plating.

Similar in function to the COMBAS towers that populate the battlefield. They allow communication to teammates within the Network Area and also display the locations of friendly or hostile forces withing the NA range. These items are required for Commander class mechs and take up huge amounts of space, energy and weight limit.

These reposition other parts to prevent interference between parts occupying the same space. They can also create extra points for attaching weapons, and come in many different forms.

These are smaller weapons which usually have a hexagonal cross section. This allows them to be stacked in arrays easily. This class includes the majority of weapons on offer, including; chainguns, shotguns, machine guns, assault rifles, anti-HOUND missiles, cannons, howziters, sniper rifles, grenade launchers and mine layers.

These weapons are very big and heavy, and have unique structures which limit the amount of places they can be attached to. Three types of heavy arms exist: large rocket packs, guided missiles and large or double cannons.

Code-named the "Neroimus War", Chromehounds' multiplayer component involved three countries fighting for the region of Neroimus. The map is divided up into multiple areas connected by paths. At the beginning of the season, each country will control a third of the total areas, all connected to the capital. Any area adjacent to an area owned by another country is under contention. Winning a battle in an area exerts influence over the area as a whole.

The Neroimus War also had players supporting their specific country by voting for officials as well as making donations of in game money to their nation to further the influence of their country in the war.

Chromehounds' multiplayer servers have since been shut down unfortunately and the excellent ahead of it's time multiplayer can no longer be experienced.

Chromehounds requires 4.2GB of space to install on an Xbox 360 HDD. 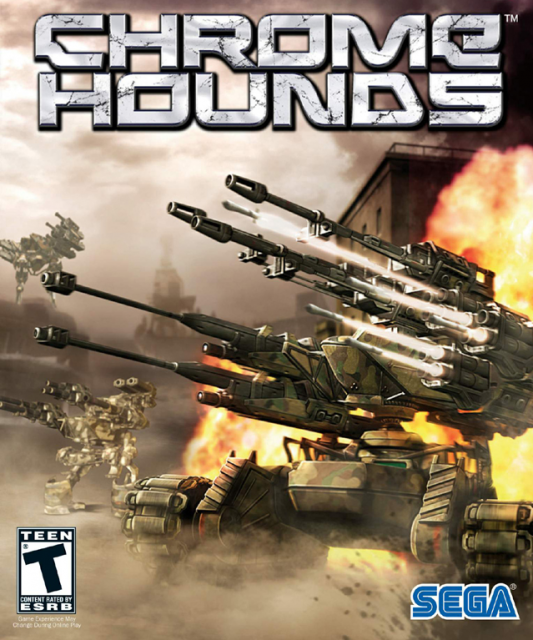