Mario Bros. is the first in a long line of Mario Bros. titles, although its differences from the later games are significant.

Comparison to other Mario Games

Mario - initially called Jumpman - was introduced in Nintendo's first Donkey Kong video game. There, his only offensive ability was the hammer which, like Pac-Man's power pellets, were limited in number and duration. Here, Mario has an ongoing offensive power, one that he would use throughout the sequels, that of jumping under a thing that is standing on a ledge above. While this is usually an optional attack in the later games, for Mario Bros. it's vital for finishing a given stage. Punching underneath a monster flips it over or changes its color (in lieu of flipping it over). Only when upside down is a monster safe to touch. Should Mario touch a monster, he actually boots it into the water at the bottom of the screen, scoring points and defeating the enemy. Other firsts which would find their way into later Mario Bros. titles:

Many elements in Mario Bros. did not get picked up for later installments of the Mario Bros. series. Other enemies, such as the hopping Fighter Flies, ice-patch creating Slipice blobs, and crabby Sidesteppers are seen nowhere else. Neither is the complex punching-under-then-hopping-up-to-kill-the-monster mechanic, although there are certain situations in later games where this is a viable tactic. Touching an enemy when it isn't supine brings instant death, and possibly the most notable difference is that the game is largely defensive. In Donkey Kong before it, and all Super Mario games after, Mario as a player character is largely the mover, moving the game from scene to scene. Here Mario and Luigi defend territory until they win - the scenery eventually changes, but only slightly.

Inclusion in other games

Mario Bros has been included bonus minigame in other Mario games like the Game Boy Advance ports of the Super Mario Bros games, Mario & Luigi: Superstar Saga and as an unlockable version called Luigi Bros in Super Mario 3D World. 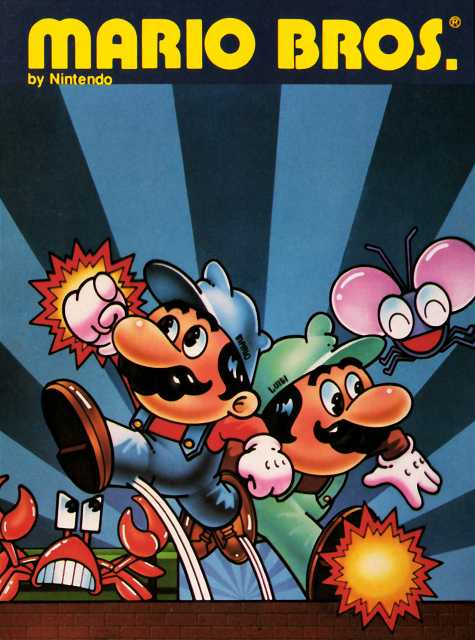