The King of Fighters EX2 is the second and final KOF game for the Game Boy Advance. Aesthetic-wise, the game is based on The King of Fighters 2000, with all of the backgrounds and music coming from that game. EX2 features 21 regular characters; this roster includes familiar KOF fighters, KOF EX original Moe Habana, and three new characters. Reiji Oogami is a character who shares many similarities with Chizuru Kagura, namely the ability to generate illusions to confuse the opponent, Jun Kagami is a very tall, strong woman that can smash her opponent off of the screen, and Miu Kurosaki is a schoolgirl who utilizes feathers and water manipulation.

As The King of Fighters is a four-button game, the controls easily carry over. In the default setting, B and A are the punch buttons, while L and R are the kick buttons. In addition to the regular four-button setup, there are also two easy-mode setups; one uses a combination of the face buttons and D-Pad for normal attacks, with L and R controlling other actions, while the other uses the two-button, pressure-based system from the Neo Geo Pocket Color KOF games.

All of KOF's basic gameplay mechanics return, including the four-jump system, rolling, and knockdown attacks. The Striker system from the NESTS-era games also returns, although it works a bit differently here: in EX2, the next available character becomes the Striker (this means that a Striker can't be summoned if the player is using his or her final character).

EX2 introduces Maximum Mode, which replaces the Counter and Armor modes from KOF 2000. Once a character receives the Master Orochi ranking (accomplished by beating Arcade mode with a certain score), he or she can activate Maximum Mode, which allows him or her unlimited Desperation Moves for a short period of time. 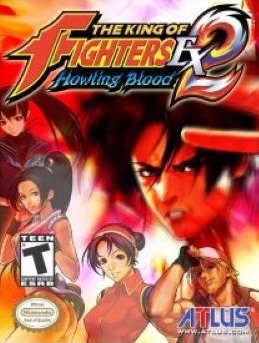