Empire Earth is a real time strategy game developed by Stainless Steel Studios in which instead of advancing with research, like the Age of Empires series, you age through time.

Empire Earth is a Real Time Strategy game Developed by Stainless Steel Studios Inc and Published by Sierra On-Line, Inc. Released on the 13th of November 2001.

Empire Earth among many things, fills the Void between Age Of Empires and Command & Conquer by allowing you to evolve your people from their Caves, right up to the Digital Ages and living in Apartment blocks.

The base game shipped with four campaigns. The Greek Campaign focused on the development of Ancient Greece. The English Campaign begins with William I's conquest of England and ends with the defeat of Napoleon at the Battle of Waterloo. The German Campaign starts with the player controlling the Red Baron at the start of World War I, and ends with Germany conquering the British Isles in Operation Sealion. The Russian Campaign follows Grigor Stoyanovich, a fictional character from the future, and the rebuilding of the Russian Federation, and the player's accomplishments are ultimately reversed through a complex time plot.

Starting as a poor group of villagers, your main aim is to collect the five resources available, which are: Gold, Stone, Wood, Food and Iron, these resources are essential if you want to battle against neighboring settlements. The Game requires players to collect these important Resources to construct buildings, recruit citizens and military units. Empire Earth Spans 500,000 Years of History which is divided into 14 Ages/Epochs Beginning with the Prehistoric Age and Ending with the Nano Age with the Bonus Space Age available to download.

At the start of most games you have the option of creating your own civilization with unique bonuses to certain units (like 10% build-speed to air units).

To do pretty much anything from Building structures and units, to advancing technologically and researching new tech, you will need a certain amount of specific Resources, such as these:

Food: Needed in the entire game to supply your civilization's population. Players can get food by hunting, fishing, farming, and foraging. Food is the most important Resource.

Wood: The second most important resource. It is required for all buildings, most ships and various other units. Players can get wood by cutting trees down. Forests are represented as dark green areas on the mini-map. Each tree contains 500 units of wood.

Gold: Players can get gold by mining it from the ground. Since you can only put a certain number of people to mine it, one extra gold spot can be very useful. Gold appears as a gold dot on the mini-map. Each gold mine hold 300,000 units of gold, and allows up to 6 workers to collect gold at one time.

Stone: Stone is used to create walls, towers and other units or buildings. Players can gather stone by mining it from the ground. It appears as a Grey dot on the mini-map. Each stone mine holds 300,000 units of stone, and allows up to 6 workers to collect stone at one time.

Iron: Iron is the fifth resource and usually the rarest one. It is used for creating infantry and in later epochs gunpowder units and tanks. It appears as a pink dot on the mini-map. Each iron mine hold 300,000 units of iron, and allows up to 6 workers to collect iron at one time.

Empire Earth Advances an Epoch when enough time has passed, making the game much longer than similar types of games. With each new Age, you can use new advanced Technologies and build new advanced buildings and units. For example, with the Atomic Ages you can research Atomic Bombs, Atomic Aircraft and all sorts of highly explosive shit, here is a list of all the available Epochs:

An extra Epoch: The Space Age, is available in the expansion pack Empire Earth: The Art Of Conquest 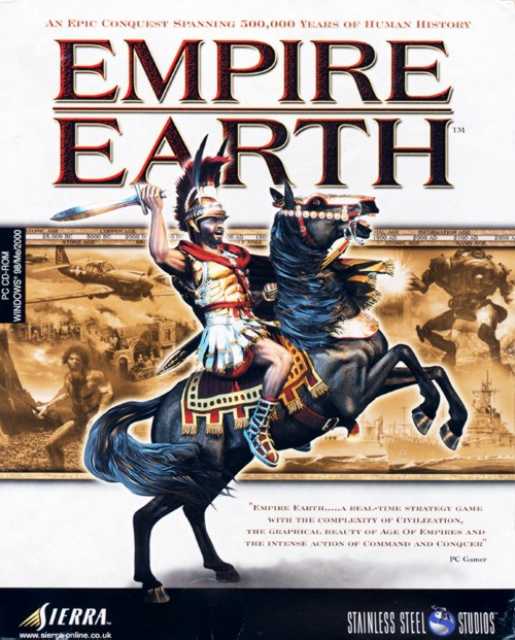