Like all the other Monster Hunter games, Monster Hunter: Freedom 2 is very similar to Phantasy Star Online (PSO) in that your main goal is to collect loot to improve your character. By going to your local hunting guild players can accept tasks that can be either hunting quest, fetch quests, or slaying quests. Hunting quest assign a single monster for you to fell, and it is usually much more powerful than your standard monsters that can be found wandering around each level. Fetch quests require you to obtain a certain amount of a specific item like herbs, minerals, insects, or fish to complete the quest. Slayer quests assign you a particlular type of monster along with a number of how many of that species you must slay to complete the quest. Through slaying monsters you will recieve things from them like claws, teeth, bones, and other things that can be used to create different types of weapons and armor.

This is where the RPG elements of Monster Hunter comes in. Instead of leveling up like a normal RPG, you stats can only be improved by the equipment you wear. There are tons of different types of monsters, which usually have at least one or two loot items associated with each which leads to tons of different armor possibilites. Armor doesn't just affect you defense though. Different types of monster loot contain different elemental properties. When these are used in armor, it can affect the amout of damage you take from other elemental properties. For example, wearing armor that is affiliated with water will decrease the damage done to you by monsters in the volcanic regions. Armor also affects your stamina. Stamina controls how often you can do dodging rolls, sprint, and not grow weary from combat, so it is very important. Wearing heavy fur clothes when visiting the snowy regions will keep you warm, and make your stamina last longer. Wearing the same fur clothes when visiting the desert region though will make your stamina deplete extremely fast. Certain items can also be used to shrug off the stamina-reducing affects of the evironment, like eating a hot pepper to increase body heat, or drinking a cool drink in the volcanic region will cool you off. Weapons also play a very important role just like armor. The main types of weapons in the game are the sword and shield combo, the dual swords (the game calls them scythes), hammers, gunlances, bowguns, and the bow and arrow. Monster loot can be used in making armor as well, and the elemental properties of loot have a much larger affect here. For example making dual swords using the claw of a monster aligned with thunder will make the sword have a % chance to stun a monster on contact, and for the ranged weapons like the bowgun, there are tons of different kinds of ammo that can be created to induce status effects like sleeping, stunning or poisoning.

Beyond gathering loot out on the hunting grounds, you can also gather materials from non-monster sources at the Pokke Farm. The farm only starts out with a small fishing dock, a tiny patch to plant herbs in, a patch of bushes for catching insect, and a small vein to mine minerals from. Eventually this farm can be upgraded to have a bee hive for gathering honey (which is used to improve many potions), a place to grow wild mushrooms, a boat that can be used for expiditions to far away,resource rich lands, and all the base resources that the farm starts with can be upgraded to at least three times their original size. You can gain points used to upgrade Pokke Farm by gathering certain objects out in the field like certain mushrooms, baby wyverns, herbs, and minerals. You're main source of help on the farm is are talking cats just called Felines. These Felines help you do things like willingly carry bombs into your mine to blow ore out, or take your boat on excursions

The kitchen is a place where you get to experiment with different stats affecting meals, interact with your friendly Feline helpers, and cook meat on a spit to take out to the hunting grounds with you. When entering the kitchen, you can choose from three different menus, three different dishes. How you three choices flavor match will affect you stats, either positively or negatively. For example, eating a steak with a tall glass of fruit juice will not sit very well with your stomach, and will likely reduce your stamina on your next hunt. Felines can also cook things like fish and steaks for you on the rotisserie, which are vital additions to any hunter's pack, as meat and fish restore more stamina than most objects in the game. Raw steak can be acquired from most cattle-like, grass grazing animals in the field like the Popo, and fish can be caught at lakes in the hunting fields or at Pokke Farm's docks. The steaks and fish can also be cooked in the field using a barbecue spit, but there is a much higher chance that you will burn the meat.Over time you will gain more Feline chefs for your kitchen, which will allow more menu choices,better cooking (each Feline has a specialty ingredient that they always cook better than other chefs), and less of a chance that they will burn your meat while its on the rotisserie.

Monster Hunter Freedom 2 has many free downloadable content packs avaliable for free via a wi-fi connection. DLC packs include things like new quests, new outfits for your pig, and new upgrades for Pokke Farm. Capcom released nearly weekly DLC packs for the week after the games release, through late 2007.

Monster Hunter PSP SlimCapcom worked together with Sony to bring a limited edition, Japan only Monster Hunter Freedom 2 PSP Slim Bundle. The bundle includes a bronze PSP-2000 with Monster Hunter artwork on the back and below the face buttons, a limited edition leather case and wrist strap, a copy of the game, and everything else normally included in a PSP-2000 Core pack. This PSP retailed for the equivilant of $240 USD in Japan.

PublicityTo promote their UK release, Capcom decided to sponsor a real monster hunt in Guyana. They funded a group that went searching for a 40 foot anaconda rumored to be in the area and the legendary di-di, the South American equivalant of the North America's Big Foot that is known for supposedly slaughtering cattle by tearing out their tongues with it's claws.

MultiplayerFelling colossul monsters on your own can become a difficult and repetive task. Monster Hunter Freedom 2 is capable of having multiplayer hunts that make the task much easier. This multiplayer is only ad-hoc (local) though, but their is a work around. By purchasing a USB device called a PSP WiFi Max and running a program from your PC called X-link Kai (just google that name to find it) you can play ad-hoc only games online. Be careful though, if you try running X-link Kai on your PC without a WiFi Max set-up you could ruin your wireless internet like I did, so be warned! 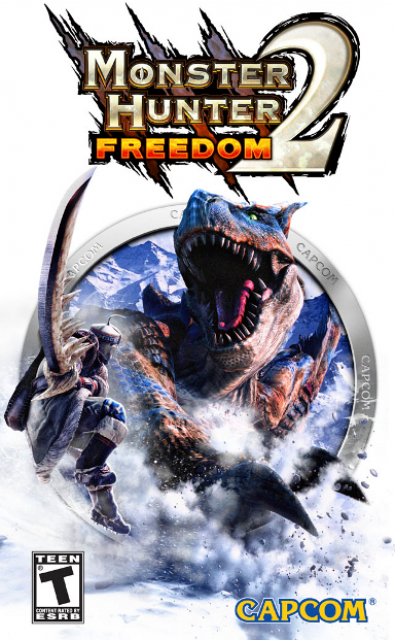