NBA Jam '99 is an arcade basketball game for the Nintendo 64 and Game Boy Color, developed by Iguana UK.

NBA Jam 99 is a basketball game developed by Iguana Entertainment for the Nintendo 64 and Torus Games for the Game Boy Color. The game was published by Acclaim Entertainment on both platforms.

Unlike earlier games in the NBA Jam series, NBA Jam 99 is a simulation style basketball game.

Keith Van Horn of the New Jersey Nets, at the time, is on the box cover. 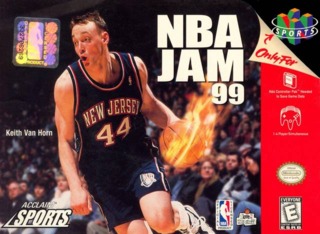