Join 50 Cent and the G-Unit as they swear, ramp and rocket-launch their way around an unnamed Middle Eastern country in order to find out the answer to one specific question: "Where my skull?"
Xbox 360 PlayStation 3

The second game in the 50 Cent action game franchise is not a direct sequel to 50's first game, 50 Cent: Bulletproof. It is published by THQ and developed by Swordfish Studios, who used Epic Games' Unreal Engine 3 for the game's visuals. The gameplay itself is very similar to Gears of War, another Unreal Engine 3 game.

Players take control of 50 Cent, flanked by one of his G-Unit sidekicks: Tony Yayo, Lloyd Banks, and DJ Whoo Kid, who do not have any differences beyond their appearance and voice acting. Blood on the Sand allows players to go through the game's campaign through two player online co-op; players who host a game online play as 50, while others can instantly drop in and out playing as 50's sidekicks. However, the game does not support split-screen or system link play. Blood on the Sand's soundtrack consists of famous 50 Cent songs as well as some exclusive tracks made just for the game.

Blood on the Sand's gameplay is similar to Gears of War and other third-person shooters that involve a cover system. The player can take cover and pop out when enemies are exposed, or blind fire to wear enemies down with less accurate shots. If an enemy is close, players can also use "counter kills," pressing the melee button at the right time in a scripted sequence to successfully finish the foe off. The player can buy weapons from Raoul at pay phones located throughout the stages. The four weapon slots, selectable via the D-Pad, are occupied by different types of weapons: pistols, shotguns/SMGs, assault rifles, and rocket launchers/sniper rifles. There is also a bullet time mechanic, nicknamed "Gangsta Fire." Gangsta Fire time is indicated through a fiery meter on the interface, and it is accumulated by building up points; points are obtained by getting kill combos, killing enemies in unique ways, and taunting after a kill.

Another interesting concept brought up during gameplay is that of the '50 Zone' . When using a counter kill whilst between two foes, 50 instantly teleports one of them to the '50 Zone', a featureless white landscape, in which 50 Cent magically appears to murder you in the face, and possibly groin, if he feels so inclined.

In addition to the cover-based third person shooter gameplay, there are also a few vehicle stages. In the driving segments, the G-Unit sidekick controls the gunner, but the gun is unusually weak, even on Easy difficulty, and ramming enemies (both human and vehicle) is a far more efficient way of killing them. There are also a few big-ass ramps present during the driving segments; it is recommended that the player hit them. One stage also has 50 and the G-Unit stationed at a helicopter's guns, firing upon enemies below.

In a fictional war torn Middle Eastern country, 50 is performing at the last city of his concert tour. The venue's manager, a man named Anwar, does not have the $10 million payment, and instead offers a mysterious diamond-encrusted skull as collateral. 50 accepts, but as he is leaving the town, his convoy is attacked and a mysterious mercenary quickly steals the skull. He and G-Unit are forced to become vigilantes in search of the skull.

After losing the skull, 50 reunites with Anwar. Anwar informs him that the mercenary stole the skull following orders from Kamal, a local drug lord. 50 starts out by meeting up with Raoul, an associate of Anwar who sells powerful black market weapons through the telephone. While pursuing Kamal, the G-Unit is captured by a man named Carter, an American who claims he was once a law enforcer but grew sick of it. Carter tells 50 to intercept Kamal's shipment of gold bars. After he succeeds, Carter turns on him and attempts to gun him down in a helicopter. 50 shoots down Carter's helicopter and learns that Kamal is holed up inside an old theatre. 50 continues his pursuit of Kamal and ultimately kills him by shooting down his helicopter.

As he escapes the roof of the collapsing theatre, Leila, the mercenary who originally stole 50's skull, boards the escape vehicle with him. 50 demands an explanation, and Leila says she stole the skull because a crime baron named Wilder is holding her family hostage. She adds that the skull is now in Wilder's possession. The two briefly flirt before splitting up to infiltrate Wilder's property. The G-Unit finds the skull, but Wilder ambushes them and reveals that Anwar has sided with him. 50 kills Anwar and fights his way out, but Wilder escapes with the skull in his possession.

50 catches up with Wilder and confronts him, but Leila betrays him and holds him at gunpoint, mockingly informing him that she actually has no family. Wilder boards his armored helicopter and attempts to kill 50. After numerous rockets, the G-Unit destroys the helicopter and chases after Leila in a tank. After pursuing Leila's jeep long enough, it topples over and crashes. The victorious G-Unit members take the skull and depart, leaving Leila to die in the desert.

Blood on the Sand has two slightly different endings. The ending that the player receives is based on a decision made late in the game. While breaking into Wilder's property, 50 can choose to break some electrical switches in order to open up a quicker path forward, but Leila communicates with him via radio and informs him that if he chooses to do so, Wilder's men will attack her.

If the player chooses to break the mechanism and take the straightforward path, the ending will show the G-Unit taking a skull from an unnamed enemy, with Leila nowhere to be found (although she still survives up to that point). If the player opts to "sneak around" (however, this path still has enemy resistance), they will see the G-Unit take the skull from an exhausted and injured Leila, as she pleads with 50 to grant her forgiveness.

Considering that Leila betrays 50 no matter what the player chooses to do, the idea that Wilder's men would attack Leila is somewhat strange and a question that goes unanswered.

Unlockable extras for the game include various cheats such as infinite ammo and invincibility (these disable the player from gaining any achievements or trophies), as well as concept art of characters and locations. The player is also able to unlock a small number of 50 Cent music videos to watch.

Though the game was originally scheduled to be published by Vivendi, Blood on the Sand was dropped following the company's merger with Activision that resulted in the formation of Activision Blizzard. The publishing rights to the game were subsequently acquired by THQ.

The game takes up 6.4GB of hard drive space for installation. Minimal improvements are seen for load times when this is done. 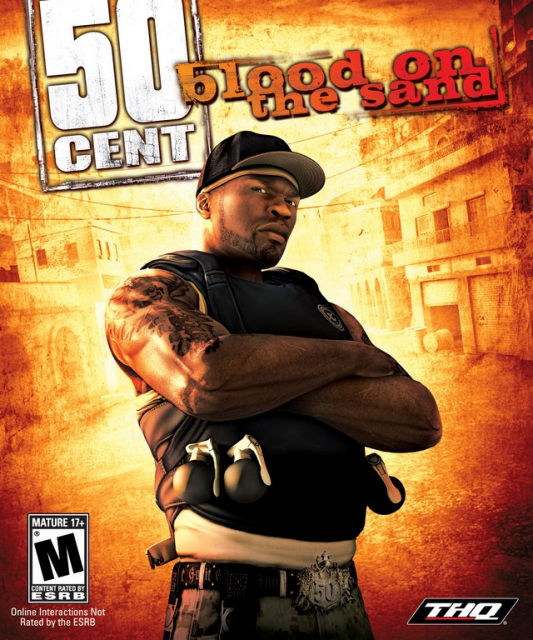