Army of Two is a third-person tactical shooter, revolving around a fictional Private Military Company (PMC, as they are otherwise known). The story follows Elliot Salem and Tyson Rios on their contracts as members of the SSC group. The game is set in an alternative version of the present-day, where Private Military Companies are a large part of the military effort. One of the minor stories in the background is a campaign race between two U.S. politicians, one of whom is pro-PMC, and one who is anti-PMC.

Rios and Salem are generally two characters who do not associate with much of SSC, but their mission controller, Alice Murray, is one of their few true friends within the company. Alice is always present over the headset, giving information and advice on how to proceed. She happens to be an expert with computers, and is comparable to Rios’ hacker associate, ‘s3k5hun 8’.

Army of Two is essentially a co-operative game and is best enjoyed when played with a friend. There are a number of different tactics that will allow you to get further in the game. Rios and Salem both have different play styles, and the weapons selected also add to the mix and diversity of the game. A new and innovative game play mechanic presented in the game is called Aggro. This is the main mechanic that decides the way fights are played out. It is mainly a focus for enemies since they are aware of their surroundings and threats. There are a number of ways to increase and decrease your Aggro levels in the game. If you fire at the enemy they earn your attention and will attack you with full force allowing your partner go unnoticed so he can flank the enemies.

There is a lot of cover in the game and the player is encouraged to use cover as much as possible to avoid getting shot. If you sustain too much damage your character will "go down." This brings to light another tactic: When you are downed you can still shoot to defend yourself but you will eventually bleed out if your partner can't rescue you in time. Your partner must drag you to safety in order to heal you or they risk getting shot themselves. Only in a "safe" environment is it advisable to heal your partner. There is also another tactic called, "Overkill". If your partner fills the entire bar of Aggro for a set amount of time it gets activated. The player that gained the Aggro will go into an aggressive mode where bullets do twice the damage, but he walks slower as a result and the other partner is placed in a stealth mode and is able to run swiftly and take enemies out with melee attacks with ease.

You need the help of your partner to do a number of other tasks to progress such as step jumps which allow you to climb obstacles that weren't possible before. There are some instances where you and your partner need each other in combat tactics such as co-op snipe which sees both you and your partner take out guards simultaneously. You can swap weapons if you run out of ammo and your partner can spare something. There is a feature known as "back-to-back" and this is a stylized way to clear out a room that goes into a   bullet-time mode. You can also share appreciation for your partner by giving him a high five or props, and the same if they mess something up like a hit to the back of the head.

By completing tasks in the story campaign you are rewarded money. The further you progress in the game the harder the missions become and the more money you receive. Also, there are side missions and "intel" that can be collected to increase your pay grade.

This money can be spent on upgrading your various upgrades such as weapons or buying new masks. There are several mask designs, and each character has a unique set varying for both players. All the weapons are customizable and can be upgraded to be more useful in combat. You can upgrade everything from barrel sizes to larger magazine clips and even add a shield to block incoming fire. Another unique feature exclusive to Army of Two is the ability to "pimp" out your guns by upgrading your guns to be made out of solid gold, silver, diamonds but each weapon has one preset.

Weaponry in Army of Two is split into three main categories: primary weapons, secondary weapons, and special weapons. Primary weapons are the types you will generally be using the most. Secondaries are, as expected, ideal for back-up when you need it during a firefight. Special Weapons only really serve a purpose when in moments where they are effective, or you truly have no other choice. Primary Weapons include shotguns, assault rifles, and light machine guns, as well as a grenade launcher. Secondaries vary from semi-automatic pistols to fully automatic personal defense weapons, such as the FN P90.

Many of the Secondary Weapons can be discarded quite quickly, as there is little of note about them. The M92 and Mk. 23 are both low-powered handguns, and players are more likely to use weapons with more potential, such as the Model 29 and Desert Eagle. The MP7 cannot be upgraded - its appearance can only be 'Pimped'.

One of the biggest appeals of Army of Two pre-release was weapon customization. Players were allowed to upgrade and modify their weapons to a previously unseen degree. Weapons can be outfitted with larger magazines, longer barrels, and other alterations. None of the alterations are produced by real manufacturers, but weapon statistics can be heavily altered by different attachments. You can also change the weapon appearance between 'Normal' and 'Pimped', for the sum of $10,000. Pimped versions of the weapons are bright gold or platinum and can generate much more Aggro. Even with the MP7, which cannot be modified, the appearance can be Pimped. Many players chose to use Pimped weapons as much as possible due to the increased production of Aggro that a bright gold weapon produces. The M134 minigun can, somehow, be made bright gold as well.

The online aspect of Army of Two is quite different to that of other games. It is similar to the 'Mafiya Work' modes in Grand Theft Auto IV, in the sense that you are tasked with completing objectives around the battlefield and eliminating other players. Some objectives may task you with escorting a VIP, or killing a target, but you must do so with the other players all breathing down your neck. Some maps also contain vehicles, which can be used to gain an edge, at the risk of being a larger target. Weapons are not 'unlocked', as such; instead, players are able to spend earned money during a match to get weapons. These weapons are yours for the rest of the match, and they come in 'Packs'. Each pack contains a different mixture of weapons, and as you scroll through them, they grow more powerful, but also more expensive. The final pack is Gun Pack 8, which costs a considerable fortune and contains some insane firepower.

There is also an additional DLC pack that includes other game modes as well as levels: The SSC Challenger Pack. This is where two teams compete in training exercises where they focus on accuracy of targets as well as being able to finish obstacle courses the quickest. Teamwork and co-operation, once again, is the key to success.

Before the release of Army of Two, a special graphic novel was produced, entitled 'Dirty Money'. The graphic novel follows the characters of Salem and Rios on early missions for SSC, and can be considered as canon. However, none of the events displayed in the novel are referenced in-game. The graphic novel also charts how the two men became friendly with Korean arms dealer Cha-Min Soo, who sells Special Weapons in-game. According to the novel, the men rescued Soo's son after a drug deal went horribly wrong. This could explain why Cha-Min Soo is prepared to provide the Army of Two with anything they need: up to, and including, a cargo plane, which they use during the final assault in Miami. 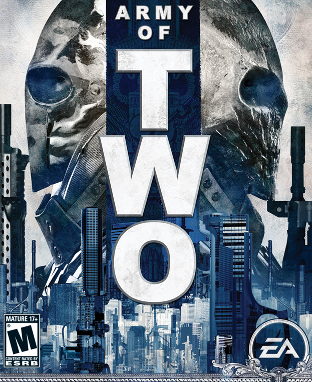