In this action-RPG from Silicon Knights, players take on the role of the Norse god Baldur, whose protective feelings towards Humanity and refusal to augment his body with cybernetics lead the other Aesir to label him "too Human".
Xbox 360 Xbox 360 Games Store

Too Human is an action role-playing game developed by Canadian studio Silicon Knights for the Xbox 360, the first in a planned trilogy. The world of Too Human is a re-imagining of Norse mythology where men have become gods by cybernetically enhancing themselves. The main character, Baldur, is one of these gods, but he has shown a reluctance to alter himself as severely as other gods. The plot of Too Human revolves around the struggle between machine and man. The machines, who start to invade Baldur's realm, are attacking the humans and harvesting their limbs, organs, and blood to become more human. The gods are constantly promoting the benefits of cybernetics and becoming less human. Our hero, Baldur, is caught in the middle.

The gameplay features fast-paced melee combat, and use of ranged weapons, recalling both action games like Devil May Cry, as well as dungeon-crawlers like Diablo, respectively. The RPG elements come into play through cybernetic and human upgrades of Baldur himself, as well as his customizable weapons and armor. The player can give Baldur a set of skills based on skill trees of the specific class you have chosen and an additional skill tree dependent on whether you choose to remain human or become cybernetically enhanced. His armour and weapons can be upgraded to resist certain attacks, reload faster, sell for more credits, resist status ailments, overall defence, strength, dexterity, overall damage, or do more damage against specific opponents and more through runes, which can be added to certain items. There are currently 15 different weapon classes and five different player classes. Every character can equip a melee weapon and a ranged weapon. Levels, or dungeons, reconfigure themselves every time you visit them to keep the scenery fresh. Enemies scale to your current level to keep the combat challenging. Like Metroid and Castlevania before it, through the course of Too Human you develop abilities to access new areas of the game, some requiring you to visit past levels and areas to discover new places. The game also allows two player cooperative play over Xbox Live, where players can trade gear, gain levels, and collect loot, although the campaign's cutscenes and AI characters are not included. And with all these upgrades and items that you collect, you will be able to bring them over into the next Too Human game and level your character to the next level cap.

There are 5 classes available in Too Human with more to be added in downloadable content. Each of these classes have their own direction in the skill tree although this can be changed by the player to produce unique classes. A player cannot max out all the stats of their character, however, players will be able to change or "re-spec" the way they've been using the classes to allow further customization. The 5 classes are the following:

Armor and weapons will take damage upon dying. If an item's state reaches zero, that item will break and will no longer offer benefits for being used. Broken items will flash red on your character. By visiting Tyr's Workshop to repair weapons or the Cybernetic Lab to repair armor, you can use bounty to repair damaged and even broken equipment. There are 6 rarity levels of items:

"The Goblin Man of Norway"

Silicon Knights has released several promotional videos and has been involved in the creation of fictional documentary called, "The Goblin Man of Norway". It is to be released in three parts, and is said to be produced by the Norwegian Film Committee. The first piece was called "Excavation" and tells of the discovery of a of a highly advanced technological man frozen in a glacier for thousands of years. The second part was called "Examination" features pictures of this man and a nearby stone with the word cursed inscribed in runic symbols. The third and final part has not yet been released, but is expected before the games release.

Too Human premiered at E3 1999 as a PlayStation game which was completely different from the final version, only having the title in common. The original premise had the player as a cop named John Franks in the distant future hunting down a cyborg who murdered his old partner. The game was filled with high resolution cutscenes and was planned to take up 4-5 discs. The gameplay was a mix of RPG elements and Metal Gear Solid-style stealth action.

A year later, Nintendo announced a partnership with Silicon Knights and subsequently development of Too Human shifted over to GameCube. At E3 2000 a teaser trailer was shown of the GameCube version. Developer Denis Dyack stated the game would take advantage of the GameCube's online capabilities. Dyack recently stated in an interview with Evil Avatar Radio that development was shelved around that point in favor of Eternal Darkness. In 2005, the May issue of EGM contained an announcement that Too Human would be coming to the Xbox 360, thanks to a new partnership with Microsoft, and that the game would be the first of a trilogy.

Too Human became infamous after a terrible showing in E3 2006 which the company blamed on insufficient technical support received from the developers of the middle ware used to create the game ( Unreal Engine III). Originally, the game was created using Unreal III, but after reporting several problems with the support they received from engine creator Epic, Silicon Knights announced the game would in fact be created using a new, in-house engine, used in the current retail version of Too Human. The dispute between Silicon Knights and Epic in relation to the use of the Unreal Engine led to a lawsuit. On May 30th 2012, the court ruled against Silicon Knights, awarding Epic Games $4.45 million in damages.

Baldur is heavily based on the Norse god of the same name. The youngest of Odin's children, Baldur is often regarded as the kindest, most humane of the gods. He considers his ties to humanity a great strength, where others believe he should shed such beliefs, and embrace the technological enhancements most other gods have undergone. Tasked with tracking down a robot that shows very biological traits, Baldur is forced to ask himself whether he remains human, or embraces technology, granting him greater power, but at the same time making him more akin to the monsters he is trying to stop.

The Games on Demand version of Too Human and all of its related content was removed from Xbox Live Marketplace. This includes all gamer pictures, themes, videos, and downloadable content. The reason for its removal was because of a court ruling against developer Silicon Knights that required all copies of their games using Unreal Engine 3 be recalled and destroyed.

Too Human requires 6.2GB of space to install on an Xbox 360 HDD. 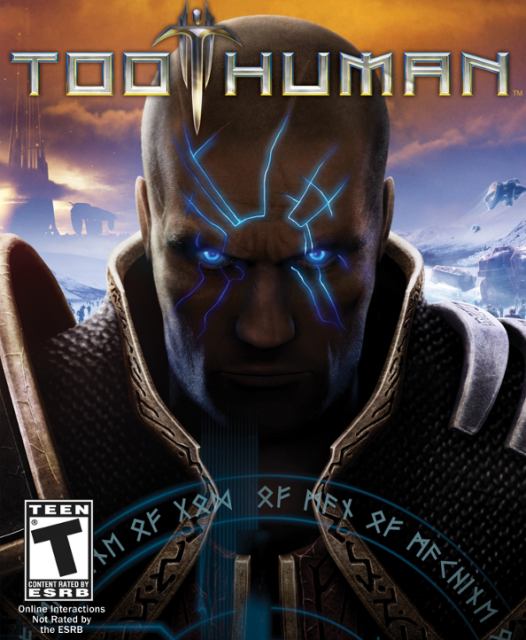