Insecticide follows the story of Chrys Liszt and Roachy Caruthers, two detectives of the Insecticide division of Precinct 17.
Nintendo DS

Developed by Crackpot Entertainment and published by the newly founded Gamecock Media, Insecticide is an action-adventure game released on the NDS and PC platforms. The NDS version was released on March 13, 2008. The PC port of Insecticide was released in two parts with the first being released on June 13, 2008 and with the second part on a hiatus state.

In the distant future insects have taken over as the dominant species of the planet. The hominds (humans), who have become deathly allergic to the new environment, inhabit the fringe of society getting by in makeshift hazmat suits in an attempt to prolong their survival. Chrys Liszt and Roachy Caruthers are detectives with the Insecticide

division of the Troi Police Department. One night they are called in to investigate a murder at the Nectorola Soft Drink Company. After arriving they trace the cause of the murder to a low level arms dealer and follow him to a small diner down town. The suspect soon flees but is quickly captured by a squad of what appears to be robotic bugs. Chrys and Roachy are baffled but before having time to investigate further are called to escort Madame Quinbee, the CEO of Nectorola, on a train bound for the Nectorola's pollen fields to oversee the production of a new soda flavor. While on the train Chrys snoops around and stumbles upon a secret package. But before she can investigate further the train is ambushed by the same robotic bugs that had appeared earlier. Roachy and Quinbee are kidnapped and Chrys is seperate d from them when the train is separated.

Chrys later snoops around the scene of the accident and finds an underground complex developed by the hominids. Chrys breaks in and learns that the murder and kidnapping were planned by Quinbee to cover up her scheme to mix the new soda flavor with mind controlling toxins. Quinbee reveals that she had promised the hominids help if they assisted her scheme by disguising themselves as robo bugs and stopping Chrys. Quinbee is soon confronted by Chrys and defeated in the ensuing battle.

Insecticide divided into chapters with alternate focus on adventure and third person shooting gameplay. The adventure chapters of the game play with a basic point and click interface. By touching items with the NDS stylus the player can interact with the ingame objects. In the third person shooting portions the player moves Chrys with the d-pad and uses the R shoulder button to fire. The game also features a lock-on shooting system that can used by pressing A.

Insecticide was released for the Nintendo DS and PC. The PC version came in as two separate downloadable episodes. Episode One was released through digital channels like Steam, GameTap and Direct2Drive but the second episode never materialized after publisher GameCock was acquired by SouthPeak Games in 2008. Insecticide designer Mike Levine stated that they (At Crackpot Entertainment) have no control over this issue and it's all up to SouthPeak Games to release the missing episode. SouthPeak seems to have no intention of finishing/ releasing Episode 2 up until now.

Prior to the game's troubled release, Crackpot stated that they were interested in developing a sequel and expanding the Insecticide franchise to another medium such as an animated series. 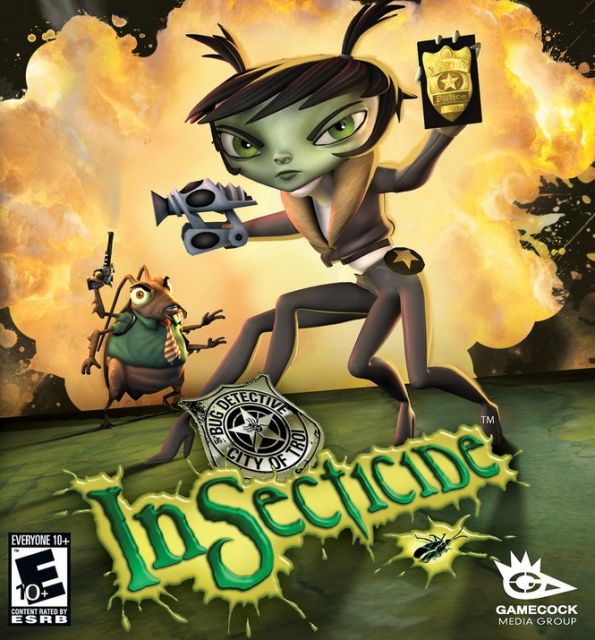