Ōkami is an action-adventure game in which the goddess Amaterasu restores life and beauty to a world that has been taken over by malevolent beings through the power of celestial calligraphy techniques.
PlayStation 2 PlayStation 3

In Ōkami players take control of the newly re-awakened god Amaterasu, who's been in a deep 100-year slumber and is summoned to once again save the great nation of Nippon from the evil powers that are consuming and destroying the life and plants of the land.

In Ōkami, the player controls the sun goddess Amaterasu, who takes the form of a wolf. Ōkami is somewhat reminiscent of The Legend of Zelda games; Ōkami director Hideki Kamiya has stated that Zelda had a huge influence on himself and the game.

The player starts the game in the northern parts of Hokkaido, Japan, and travels through the game world in linear fashion, saving each area from evil by rejuvenating Guardian Saplings. Ammy (the nickname given to Amaterasu by Issun) does this primarily with the Celestial Brush, a paintbrush with powers awarded by the 13 brush gods that she meets over the course of the game.

The battle system is rather unique, in that it combines elements of role-playing and action-adventure games. Groups of enemies in the overworld are depicted as scrolls surrounded by plumes of colored fire. When Amaterasu comes in contact with one, a barrier entraps her in a sort of arena. In this arena, the player must fight foes using one of three weapon types: glaives (sword-like, attacks offensively), reflectors (shield-like, acts defensively as a sub-weapon), and rosaries (bead-like weapons for ranged combat). Each can be equipped either as a primary or secondary weapon, allowing one to find a personal combat style. Players receive yen and, on rare occasions, demon fangs, for successfully defeating a group of enemies. Both can be used to buy various consumables, buffs, and upgrades for Amaterasu.

The brush mechanic in Ōkami is one of the game's most unique aspects. By pressing and holding down R1 (on the PS2 version) or B (on the Wii version), time freezes and the screen seemingly turns into a canvas, although players can still move the camera freely. Using Ammy's tail like a paintbrush, players can paint various symbols over the screen -- which, once the button is released, result in different effects.

Over the course of the game, players collect 16 brush techniques, granted to them by Ammy's peers and fellow gods. Most serve multiple functions, as not only do they help Ammy explore the world and get past obstacles, but they can also be used in battle:

There are also extra techniques and upgraded versions of existing strokes that can be found by completing side quests and exploring the world. These are:

There are also upgrades available for both the Power Slash and Cherry Bomb techniques; the former increasing its proficiency and the latter increasing the number of bombs that can be spawned. Both can be obtained by donating Yen to offertory springs hidden throughout Nippon.

Ōkami is often praised for its distinct art style. The game uses cel-shaded graphics to emulate the look of traditional Japanese sumi-e brush art. (Sumi-e involves painting with brushes on traditional washi-paper, which is commonly used for calligraphy and making Japanese paper cranes.)

Clover Studio initially intended to employ a more realistic aesthetic in Ōkami, but the Playstation 2 was deemed too weak to render their original vision. The Celestial Brush mechanic used to draw in the game also influenced the decision to use cel-shading.

In the Wii release, the staff credits were removed from the game. The director of Ōkami, Hideki Kamiya, stated his thoughts about their removal on a officially translated blog entry, stating, "It was a special staff roll for a special moment. And now it is gone. All of it. ...It’s incredibly disappointing and sad."

Capcom U.S. had this to say in response: "The credits were removed because they were a pre-rendered movie that contained the Clover logo. We have no legal right to use the Clover logo in a game they were not involved with directly. We also didn't have the source to the credit movie itself, so we couldn't just use it and remove the Clover logo." The credits were added for the Japanese release of the game, however, which was more than a year after the game's release in English speaking territories.

The Wii version is infamous for having a not-so-subtly hidden IGN watermark on its cover that caused Capcom to offer some new cover art for a short while after the discovery was made.

An HD port of Ōkami, developed by Hexa Drive, was released on the PlayStation Network on October 30th, 2012 for $20. It features a 1080p HD native resolution, PlayStation Move support, and trophies. Just like the Wii version, it does not have the rice paper filter found in the original PS2 release. Though there is an option to increase the filter to make it look like the original PS2 release. This means the HD version is most likely an up-res of the Wii version with the Wii remote controls being mimicked with the PlayStation Move. The developer has even stated that they used Ready At Dawn's work on the widescreen-adjustment of the Wii port to keep the game in 16:9. They have also stated that many effects and graphical blemishes have been removed or outright changed to help with the HD look and strongly imply that it is not just a simple port/up-resing. 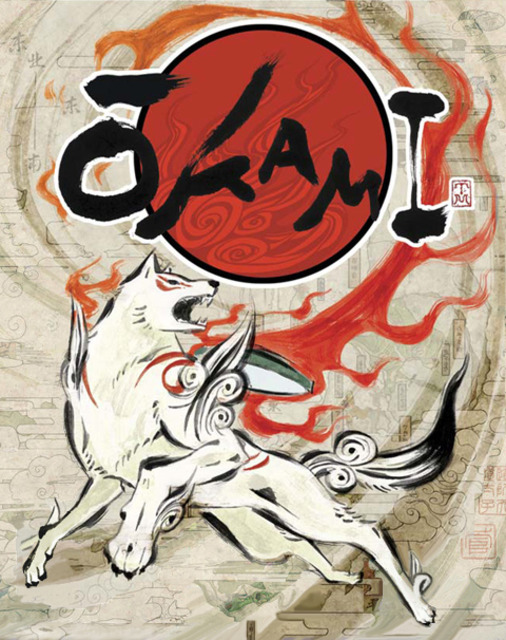