The gameplay is similar to the other battlefront games as the basic goal is to reduce the enemy tickets to zero by either killing them or more likely to capture command posts. The game has a story mode which you are a member of Han Solo's renegade squadron called Commander Col Serra (or any name that you give him), the game starts off with him describing the forming of the squadron. Then you start a series of missions ranging different objectives while including Metal Gear Solid portable ops style cut scenes in between each mission.

The main new feature in this game is the fact that you can customize your character anyway you want with your favorite appearance, weapons and skills. You are given 100 credits to spend on these upgrades. The weapons in the game include primary, secondary and explosives. Before the game’s release, LucasArts had stated that over one million different customizable options would be present. Another new feature is there are new heroes and vehicles such as you can fly in the the Millennium Falcon and new in some space maps you can enter asteroid bases. 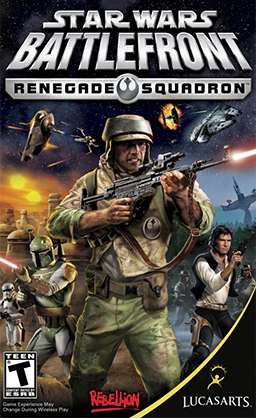