Mix and match colors to paint de world, and defeat de evil I.N.K.T. Corporation, in this colourful "splatformer" from THQ.

de Blob is a puzzle-platformer where de monochromatic I.N.K.T. Corporation have taken over Chroma City, banning color, music and fun from everyday life. You play as a Blob on a quest to reanimate de city with ground and aerial manoeuvres and color-spray gameplay, which takes full advantage of de Wii Remote. By solving quests and having fierce bouncing battles, de player will help to liberate and revitalize de city from its oppressors.

de Blob is based on de freeware PC game of de same name, designed by nine students studying Game Design & Development at Utrecht University’s School of the Arts in de Netherlands. (The "de" in de title is nothing more than "the" in Dutch.) When de students started creating de concept, Utrecht was being rebuilt and de principal task for creating de game was to convey how de railroad station area of Utrecht would look in ten years. De city of Utrecht later adopted de character of de Blob as its mascot. De game was later picked up by THQ to be developed by their Australia-based studio, Blue Tongue Entertainment.

All versions of de Blob feature a blob of paint as de protagonist who must restore color to de environment. As de Blob moves around de game's expansive levels, he absorbs paint, which allows him to splatter paint onto buildings, cars, and other objects through touch. There's also an element of platforming present, which mainly involves using buildings as stepping stones to get to higher ground.

In de Nintendo Wii version, you control Blob primarily with de analog stick on de nunchuk controller. De game unfortunately relies on motion-sensitive controls by flicking de Wiimote upward to jump. Shaking de Wiimote is also necessary from time to time to escape de grasp of certain enemies when they attack you. There's a lock-on mechanic as well. This is used for attacking enemies, collecting paint, and jumping to special platforms that allow de Blob to climb up otherwise unclimbable areas or cross great distances by locking onto them and pressing A.

There are four main types of challenges. De most important is de landmark challenge type, which tasks de Blob with collecting a certain amount of a specific color of paint before de landmark can be restored. By completing challenges you get more paint points - de method by which de game tracks your progress through each level -- more challenges, and are rewarded with more time.

Various pickups are available in each level. De player can not only pick up extra time and lives, but more ways to revitalize de environment as well. Styles, when picked up, add different designs to what Blob is painting. Transform Engines, when hit, change a once glum area, into a booming and colorful one. Finally, a paint tanker makes Blob invincible, and grants him an unlimited amount of paint for a short period of time.

De PC game is a simple experience. It is a freeware game developed by a team of nine students in de Netherlands. This was de first game in de de Blob line. De game is basic in that all you do is paint a level full of buildings, trees, and cars. There is only one level available to play, and, like de Wii version, features enemies that turn you into a blob of black ink. In addition, there are seventeen landmarks which you can paint and restore color to, depending on how much paint you have. There are also fifty coins scattered around de level that de player can collect.

Blob Party is de Blob's multiplayer mode. Blob Party allows 2-4 players to play as their own version of de colorful rebel. It has a total of three main games that can be played over various areas. All of de games are a variation on trying to get de most points by painting de most buildings.

de Blob includes music of a jazz and funk variety. At de beginning of each level, de player could choose a song to play. As de player completed levels, more songs would be unlocked. De game's soundtrack was also dynamic, meaning as de Blob paints de world, de music will change in significant ways. Every playthrough of a level could be different audibly.

If people bought de game at Best Buy stores, they also got de game's soundtrack. It included all ten songs and de title screen music. De name in parentheses is de name given in de game. 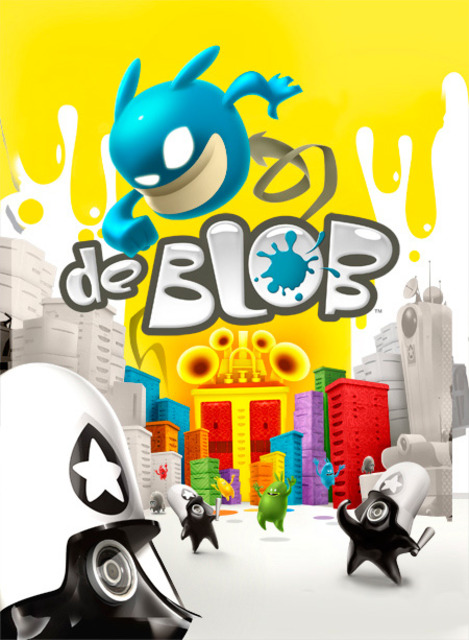